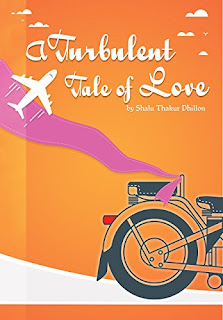 A beautiful romance fiction by the author which is ably supported by the cover pic and most importantly, the title.

Is Love smooth?
Love is full of emotions with ups and downs. It is irrespective of who it is between, even if it is among the known circle.

Nihal, a pilot by profession falls in love with Rabani at first sight. Rabani was initially skeptical sine she thought that Nihal was stalking her but she soon realized it wasn't the case.

Nihal was from a well to do family and so as Rabani. Fortunately, Nihal's bet friend Neil gets engaged to Mannat who was none other than Rabani's Sister but unfortunately Mannat has had a bad image about Nihal since she studied with him.

Nihal on the other hand also had some dark past which kept haunting him and his parents. His mother wanted him to get married to her best friend's daughter.

Did Nihal get to marry Rabani?
What was the dark past he had?
Did the turbulence in his life met with vigor strength?

The story is full of emotions with few twists which would make it an interesting read. Whaat I like the most is the flow which was so smooth and an absolute breeze.

This is a debut novel by the author but when I read it, I could definitely not believe it. I am sure when you finish reading this novel, you will agree with me as well.