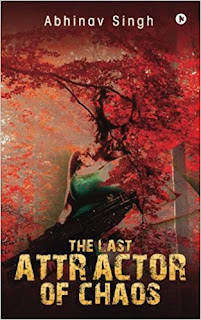 
A fast paced thriller that would keep you hooked from the beginning till the end. The story, I would say would not only come under Thriller but it also has a pinch of Sci-Fi attached to it making it a great read for those who loves these two genres.

When I was reading the story, I was feeling that I was seeing Dr Strange and Underworld Evolution together(in a different concept). No where you would feel bored when you were reading the story which is the success element for this novel.

When Scientist Ashwin Rathore gets killed instead of his wife Shruti, he hardly knew that she had greater secrets hidden with her. She belonged to the task force which was assigned to protect a weapon which would bring massive destruction, if it had fallen in the wrong hands.

However she herself gets vindicated despite her best attempts to prove her innocence to Col Raguvaran. On the other hand, her boss - Director of IB Raman Vasudevan and Atul Sinha beieved that she was innocent to be pressed with charges of treason despite her association with Junaid Hassan, a person who is known for his contacts with underworld and on top of that, Mahesh Mehta who was under the lens of IB for a while tries calling up Shruti before he gets killed.

Who is behind all these chaos?
What is their motive?
Did Shruti prove her innocence?
Did she do it all alone by herself or did someone help her?

Read this novel which would open up various avenues making you feel real surprised with the twists and turns, it has to offer....