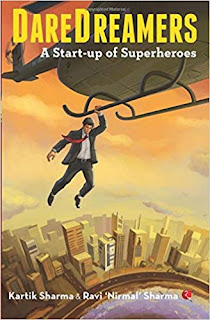 When I saw the title, I never thought it is a novel but I was intrigued by the cover and yes, it turned out to be one excellent novel. The cover page is very much relevant to the story and you would agree, only when you finish reading it.

I also ha another doubt as to who pens down which part and this doubt of mine got cleared in the end - in the acknowledgements section.

Rasiq lands up in a lucrative job as soon as he finishes his studies. Though he earned handsome, he gets cheated by his girlfriend. This along with other circumstances pushes him to venture into a new start-up along with others called DareDreamers which involves in rescuing those who were in danger. With very minimal investment but with their sheer grit and determination, they signs up couple of big companies but their rise to stardom in such a brief period makes them get into trouble with their competitor G-Force.

What did G-Force do?
Were the DareDreamers able to pull up their strings?

Read the story which is no less than any thriller out there. I am sure that you would like the plot just like I did....