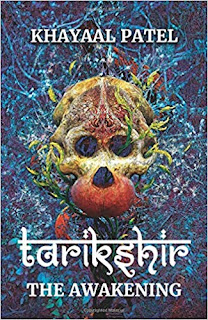 The novel is well written and considering the fact that the story happens during the 19th century, it offers a unique proposition to the entire story. I liked the introduction which was really lengthy but it justified the need of it.

There was something which was guarded secretly and when it gets unleashed, it could bring in much of destruction. People called it Tarikshir but awakening it wasn't an easy one. While the story is set in the Devangarh ruled by Rajputs, Rudra Pratap Chauhan who was the crown prince loses his father Raja Ravindra, his mother and also his uncle Shamsher Singh, who was once hated by all for his lust for power and greed.

While Raja Ravindra was preparing for facing the British invasion led by Walken, he gets mysteriously killed. While Rudra's mother suspects Shen-Zhou, a Chinese Master who once taught war tactics to Rudra, he doubts his uncle.

He approaches Ghazi to help him rule Devangarh but he gets killed as well. He however finds a recluse in Duryadutta, Nafisa through whom he comes to now about some secrets while he also unveils some secrets himself from a fort.

What are these secrets?
Who is Tarikshir?
Was Tarikshir awakened?
If yes, who could stop it or how was Tarikshir banished?
Who was behind the murder of Raja Ravindra?