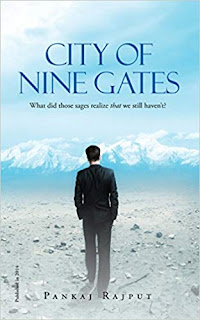 Gyan, the protagonist of the story makes millions in his business and was about to be awarded for his business acumen and achievements. Just then, he stumbles upon a startling discovery. Though archaeologists considered it as a temple, he wasn't satisfied as it never looked like one. However, when he finds an entry which was concealed for centuries, he could not believe as to what he saw.

The site which was found close to Himalayas, along the Ganges was believed to be more than 5,000 years old. To his astonishment, he comes to know about the architectural marvel as the initial discovery was carved out from a single stone. He then finds out that the structure was just a jewel in the crown to the mystical city of nine gates.

This is where, his journey begins and so for us as well - the readers. This beautiful city is cursed and who can lift the curse and when? Most importantly, what is this curse and why should this be lifted?

Gyan who was initially confused with the various inmates in the city starts realizing about what is happening around him, slowly but steadily. He also gets the assistance from the magic fabric which keeps guiding him with various information that it prints for him(before it is disappeared).

The City of Parth was the place he was travelling to. He initially wanted to find as to who this person Parth is but when he comes across each and every individual who called themselves as "Parth", his confusion grows manifold. But slowly, he starts unfolding the mystery surrounding him and the mystical city.  He stumbles upon the truth o how Budhi, Vidya and Ahamkara can infuse self realization in the human soul which in turn leads him into the sea of mixed emotions creating an imbalance or liberation.

Author has beautifully infused the story with worldly knowledge by making a proportional mix of Archaeology,Philosophy, Physics and Myth among others making it an interesting read. It would give you a tinge of reading and sailing through various genre without letting you feel bored but at the same time, to give more concentration, without which the story could not be grasped and understood in its true form.

Disclaimer- This book review is a part of The Readers Cosmos Book Review Program and Blog Tours, for details log on to thereaderscosmos.blogspot.in