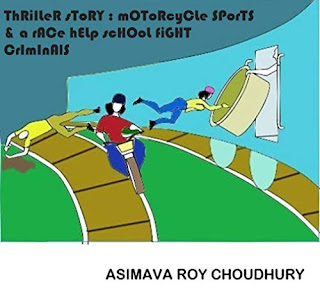 The story is set up as happening in a school. The protagonist, Harsh was studying in class ten. He was more focused on sports and physical activity. While playing a game of soccer, he meets a new guy called Nikhil aka Nickel. After facing the defeat, he goes voluntarily to his house to congratulate him and meets Tidy.

Around the same time, one of the security cam gets stolen from the school. This cam was suspected to have captured few events which had led to the collision of the Principal with the Physical Education teacher Mitty. Even before this could be investigated, he received RTI application asking for many information. Most importantly among them was the information about number of CCTV's being installed and their configuration.

On the other hand, Harsh an his friends ends up in a physical dual with the local goons. This leads to lot of unexpected turn of events in their life. Though they were warned by the cops not to take that route, Harsh was forced to take it.

What made Harsh take that dreaded route?

The goons escape and they have now become a threat to the lives of Harsh, Tidy, Bruce and others. On the other hand, there was this annual function planned.

What happens to the RTI?
Who filed it?
Did the school annual function happen without any hindrance?
What had happened to the local goons and why they were in dual with Harsh,Bruce and Tidy?
Were they been arrested?

To find out the answer for all the above questions, download the book on your Kindle. I am sure you would go back to your schooling days(not because of the incidents/portrayal of events as it is but would make you rewind back your memories with respect to your behavior like fear, obedience, friendship, rivalry among others). A good attempt by the author.

This is available as an eBook on Amazon Kindle.