Book Review - When The Devil Whispers 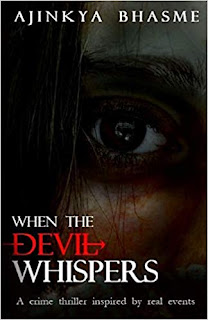 The story is inspired by the real events. I am really not sure as to how much was related to the real life incidents but for sure, this would give you goosebumps when you finished reading it.

A young woman, Shalini gets kidnapped in the middle of the night and when she recollects the incidents after being kept in captive, she vaguely recognizes her father being around at the time of her kidnap.

On the other hand, Manoj starts getting some bizarre dreams and illusion. He gets to see the images of few kids with blood in their body. Who was he? Why should he be getting such dreams/illusion?

Alka, mother of Shalini after finding her daughter was in trouble, heads over to Sangli(where Shalini stayed).She comes under the lens of cops after her erratic behaviour which included the identification of the corpse of her husband. The mutilated body's post mortem report said that the person was around 27-30 years whereas Ajay was easily in his 50's. Why did Alka lie?

What she has to hide?

Gayatri took extra care on Shalini. Why did she do so?

Dr Dhope who was the family doctor for Ajay and Alka, treats Ajay even without letting Alka know about it. What is so grave that he has to hide the fact?

Radhika and Smita on the other hand were black-mailing Manoj. Who are they and why did they blackmail him?

Did the cops Inspector Patil, Inspector Prashant, Deepak and Ashwin manage to solve the mystery behind the murder, kidnap and torching of an old lady with her house?

As this story revolves around various characters, it would become real difficult for you as to who you would call a Protagonist. Each and every character was given an equal role.

A Captivating thriller, is what I can say about this book as I enjoyed from the beginning till the end.

This book is available as eBook and Paperback on Amazon.