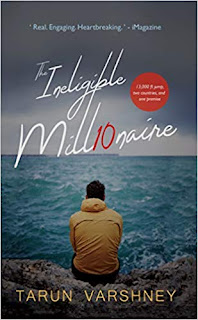 This novel has already got some rave reviews from authors like Ranjit Arora, Geetika Saigal and iMagazine called it "Real.Engaging.Heartbreaking". When I finished reading this novel, I couldn't agree for more. The book despite being a non-thriller has kept me hooked till I finished reading all the 263 pages in one go. This is a rarity because only few books has done this prior. This shows how engaging the content is.

To start with, I liked the cover page as it very much corresponds to the story. It shows the image of a man, who has got everything but ends up with nothing. When I mean nothing, it isn't the material thing, I am discussing about. What it is then?

Arjun, the protagonist hails from a middle income family. His dad ran into debts after he encounters an accident. He could not work and hence has to borrow money in huge sums to fund his education. Arjun, despite being a bright student ends up scoring much less in the crucial 10th and 12th Std exams. How did these scores affect his career prospects?

Arjun had few friends who helped him when he was in despair but despite that, he has to face few hiccups in his life. He vowed that he would get his family's finances back on track after some persuasion. Was he not self motivated? Who persuades him?

Arjun falls in love with Shreya during his college days but destiny had a different tale. Though Shreya too liked Arjun, she calls it a day. Why did she do that?

Arjun who started his career as a freelancer ends up securing jobs in companies like Amazon and Microsoft though he was rejected during his campus interview days by Indian MNC's like TCS,Infosys and Wipro. If he could not impress the Indian MNC's. how could he pull the string in impressing World's top notch IT companies? What magic did he have?

Read this novel which is motivating, assuring and above all, gives you a feel good attitude to a greater extent as to how one could motivate himself/herself to achieve greater heights.