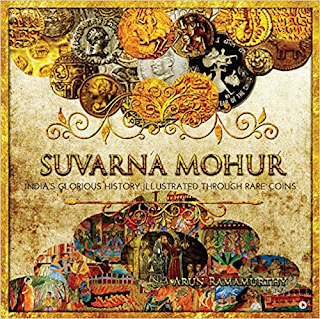 Through this excellent book "Suvarna Mohur", Author Arun Ramamurthy has beautifully combined history and also the coins associated with it. This book completely focuses on Indian History spanning over a period of almost 2500 years.

What I liked the most is the size and quality of the book. It is as big as a coin album, made of thick paperback outer cover. All the pages in this book is made of superior quality,glossy finish, colour papers with a "Gold Theme" since "Suvarna" translates to "Gold".

It begins with an introduction followed by the barter system. The book has some unique pictures being used in each chapter which very much complements the subject.

Each chapter has one major coin associated with the period followed by 6 other coins that were in circulation during that time. These coins carries not only the picture but also other details like size, measurement, weight, metals being used, Obverse and Reverse and the description of the pics being embossed on them along with their importance and relevance.

What I liked the most is the classification of the coins as well which ranges from scarce, rare, very rare, extremely rare and unique.

To sum it up, this book is a treasure trove of information about coins and the history associated with it. If you are a numismatist, you shouldn't miss it for sure or even otherwise. Grab your copy today.