Catch Your Favorite Tele-serial Early – Only On Zee5

Television is the best friend for homemakers. It helps them beat the boredom of being alone especially when there is no one to give them company at home. With the passing time, the content on TV grew multi-fold and now people have many options to choose. This leads to people developing preferences when it comes to watching content on TV, especially TV shows. When it comes to Tamil, it is the same case. While there are many shows on-air, one show that has been really catching people’s attention is Sembaruthi. 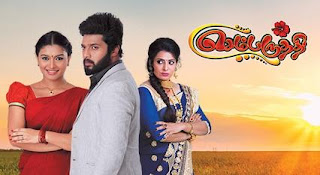 This is one of the programs among many which has managed to strike the chord among its viewers by invoking interest with each episode as it combines various aspects like Love, Thrill, Suspense, Hatred and Treachery among others.

Airing at 9 PM on weekdays, Sembaruthi is about how Akilandeshwari – played by Priya Raman is proud about her wealth and what happens when her own son Aditya (played by Karthik Raj) falls in love with a poor girl who comes to work in their house as a servant maid. Parvathi (portrayed by Shabana), the maid through her kindness and good behaviour makes Aditya fall for her and what follows, forms the rest of the story. The show marks the comeback of Karthik Raj after 2 years to the small screen.

The serial has received reviews from various walks of life and has also received 8 awards in the lastly
concluded “Zee Kudumbam Awards 2018” for Favorite Dad (portrayed by Dad Sundaram, Priya Raman for her exceptional acting as Akilandeshwari, Vanaja for her villain role, Kathir(Adithya’s brother Arun) has won the best supporting actor, Favorite Serial Award, Adhitya and Parvathi for Best Pair and also for Best Hero and Best Hero Awards being bagged by Karthik and Parvathy).

But let’s focus on a common problem that many TV viewers face. There is a specific timing assigned to each program and Sembaruthi is no exception to this rule. Usually, programs are assigned timings based on their popularity. The more the popularity, there are more likely chances for the program to be aired in the evening beginning from 7 PM and goes all the way up to 11 PM.

Not all could afford the luxury of watching their programs late in the evening. This may arise due to
various circumstances like preparing food, spending time with the family, going for an outing, attending a function to name a few.

What happens by then?
You tend to miss the program for that particular day and have to wait for the repeat or re-telecast on
some other day/time. This is acceptable only if happens once in a while. When you miss episodes on a regular basis, you tend to lose interest over the program since there is no continuity. The Continuity factor is the major aspect that would decide your loyalty and interest towards a program.  But is there a way to address this concern?

Yes. There is a way.

This is where ZEE5 comes into the picture. This is an app from the Zee Group which can be downloaded into any of your gadgets – be it a laptop/mobile phone/tab. Once downloaded, you can watch your favourite program much in advance. When I say in advance, you can watch your favourite program “Sembaruthi” 8 hours in advance. You read it right. You can get to see this serial in the morning itself. You
do not have to wait until it gets aired on your television since most of the time, evenings can be chaotic
with family members quarrelling to watch their favourite program.
Moreover, you would be having ample of time in the morning after completing your daily chores and
with the ZEE5 app on your gadget, you have a complete control with no one having to question your
authority over the usage. The best part - It doesn’t cost a bomb. For Rs.49 per month, you can watch all the latest Tamil movies, Live TV and ZEE Tamil shows online.

Disclaimer: If the entire family of yours is the fan of this tele-serial, then there is no threat to you to
catch it up leisurely in the evening. However, when you get to know about the content in advance, you can play a spoil-sport by revealing the scenes to your family even before they could get to see it but I am not liable for any repercussions that arise because of this :-)

I wanted to thank you for this excellent read!! I definitely loved every little bit of it. I have you bookmarked your site to check out the new stuff you post. locateanumber