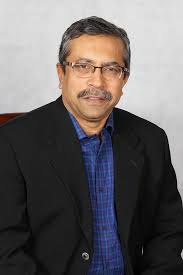 1. What prompted you to write stories/novels? When did you start writing them?

It was the urge to recreate the human mind at work - intrigue, conspiracy and benevolence working side by side-  and the geographical beauty of a place, through words, that prompted me to write stories and novels. I hoped that people would read about them and contemplate on the message that I had to convey. I published my first novel, “Land of Two Seas,” in 2015

2. Are the protagonists in your novel Unforeseen inspired by real life situations?

The book is inspired by the experiences of a Pakistani colleague of mine, who had to travel to India from the Middle-East for the liver-transplant surgery of his eight-year-old daughter. Every year, hundreds of Pakistanis are faced with this prospect to travel to India for a variety of life-saving medical treatment. Due to repeated terror attacks, masterminded by an unconcerned Pak Army, their passage to India is mired in long-drawn security checks. Where time is of the essence, senseless acts of terrorism put the lives of the ailing at risk. This drove me to write Unforeseen: A battle for his daughter’s life.

3. Who’s your favourite character from your novel Unforeseen?

Undoubtedly the main character of my book – a young Pakistani called Yousuf. Caught between the law and the outlaws, he embarks on a desperate bid to prove his innocence. As he runs from the streets of Delhi to the PirPanjals in the Himalayas and the valley of Kashmir, little is he aware of the terrible fate awaiting him, his wife and his daughter.

4. Did you make use of imagination while penning down this book?

Ofcourse I did. Though the story is inspired by a real-life character, it is basically a fiction. A lot of research on history, geography and technology has gone into it, though.

5. What is your favourite genre apart from general fiction?

6. Who is your ideal writer/author and why?

Jeffrey Archer. That is because he has a lucid style of writing and uses contemporary events as plots for his books. Readers can identify themselves with his plots and characters which increases the suspense in his thrillers many-fold. My stories usually revolve around places that I have been to and people with whom I have interacted.

7. What difficulties did you face while you started writing and how did you overcome them?

Writing the novel was an enjoyable experience for me, so I can’t say that I faced any difficulties on the way. However, finding time to write daily, while I had a day job, was a challenge that I overcame by waking up 2 hours earlier in the morning or going to sleep a couple of hours later. We start work at 7:30AM in Bahrain, so I used to get up at 4 in the morning to write.

8. What is the message you would want to give it to your readers?

The message that I would like to convey is simple – Similarities between human beings are natural and all differences are man-made. No ideals, not even religious, should come in the way of humanity.

9. Have you had an opportunity to interact with budding or established Authors? If yes, what was your take away from them?

Yes, I have interacted with budding authors on many occasions. I live and work in the Kingdom of Bahrain and am a member of the Bahrain Writers’ Circle. For most authors, writing a book is only half the job done. Marketing it, by spreading the word among readers, is the other, equally important, half.

10. When is your next book expected to be released?

In about two years from now. It will be a historic novel based on India, in the thriller genre.