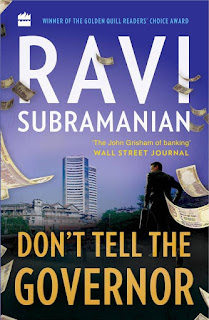 When the Wall Street Journal has called Ravi Subramanian as "The John Grisham of Banking", what more can you expect from the author who is known for his hit releases like If God Was a Banker, The Bankster, The Best Seller She Wrote, In the Name of God etc to have come out in this novel?

If you are an Indian or someone who follows Indian politics and banking, you would be left with awe as to how intricately all those incidents which has happened in India in the span of last 3 years has been put into good use by weaving a story which would keep you hooked from the beginning till the end. The author just did that. He, being an Investment Banker himself knew the tricks of the trade better and has used all his experience to weave such a gripping novel which had lot of twists and turns and when you get to know as to who the real culprit was, you would be in for a surprise.

The characters were well used giving equal weightage to all. The story revolves around Aditya Keavan who gets the plum RBI Governor's post without him asking for it. He gets to meet bollywood startlet Pallavi and gets smitten by her charm and beauty. On the other hand, Pallavi's husband Vicky Malhotra starts a firm which goes bust but on the other hand, he floats a ponzi scheme with the help of Mehul Modi(not the other one). Of course there were lot of other characters like Kabir Khan, Vicky Malhotra, Chakravarthi, Kangana, Khosla, Ranjeet Kumar, Pande, Harsha Ranjan, Carlo Pinotti who had their own roles to play.

The story revolves around IPL, betting, Poni Schemes, Demonetisation, Betrayal, Tapping, Ransom, Hijacking, Insider Info and what not - making it a perfect movie material. Of course when I was reading the final chapter, it kind of reminded me of bollywood movie RACE but then , the end was totally unexpected. The story and the characterization is so intense that if someone reads this book after a century, he/she for sure would think this is what has happened in the Indian Banking scenario for real - unless the weren't told otherwise:-)

This book is available on Amazon, Flipkart and on leading bookstores, offline.