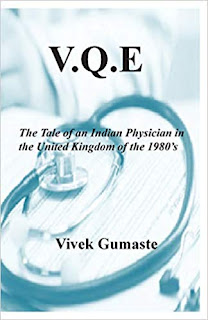 When I first saw the title of the book, I wondered what does V.Q.E denote though I had a hint about the content after going through the cover which said “The tale of an Indian physician in the United Kingdom of the 1980’s

Before I could begin writing about the book, I must say that I was thoroughly impressed with the Preface and Prologue. I usually do not care to write much about this but the content in these two sections kindled the interest within me to finish reading the book in no time.

The content of the book can be put up in a single line as was mentioned in the quotes. The experience of Dr Vivek Gumaste who had graduated from one of the top medical institute (JIPMER) in the country was nothing less to be compared with an adventurer or explorer who was set to travel to an unknown land keeping only the education and work experience as his defense.

I was glad in a way that I saw some similarities with the author. Yes. I did work for a UK based bank for 8 years and not even once in those 8 years, had I worked on our Independence Day (August 15th). The sense of patriotism was very much evident in the writing of the author which brought out the reality of the so called “Developed Nation” during the 1980’s. The Country was riddled with racism and when he himself was a victim on couple of occasion, what more could stand as a testimony to it?
The book has been divided into Three Parts with 24 chapters in total. Though this is a memoir, author begs to differ. By all means, his thoughts are justified as well.

What I liked in this book is the way, the events were narrated which is nothing less than a fiction making it a real interesting one. It gives a vivid picture as to how favoritism ruled the appointments even in the incumbent field of medicine where only the Knowledge and Experience should have played a vital role. He also outlined the difficulties he faced with regards to food, culture, climate and customs. Lot of critical events have been vividly described and what I must appreciate in this book is the inclusion of intricate details which shows that the author possesses a great memory power considering the fact that this book was written almost after 30 years.

His struggle did yield him the desired results in the end but in order to achieve that, he has to undergo so many rigorous procedures braving his life, at times. Since I worked for a UK based company and was in the customer service department, I could clearly connect the difficulties an Indian would have faced in the initial stages especially when it comes to understanding their language and dialect.

There are two things I would like to mention among many learning points for me in this book.

2    2. We usually call the nurse as “Sister” which is reality is designated only for the “Head Nurse” and not for everyone.

Read this book which would open up new thoughts removing your doubts over how even a successful doctor has had to undergo so much in their life before they reach the place, where they are today…