Book Review - The End Of Romance:Lessons in Patriarchy,Feminism,Rights and Privileges 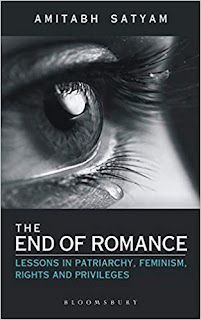 Gender inequality has always been a subject of discussion and debate. This is a universal topic which has never faded till date. There are many groups which have been formed in the name of "supporting or protecting the gender" but most of them are predominantly towards protecting the Women.

Are women the weaker gender?

If you were of that notion, your perceptions would change once you finish reading this well researched book. I was no exception because I too had the same notion prior. May be, I too was brainwashed or was forced to believe that they were weak, but the reality portrays a different picture.

Amitabh has clearly mentioned that this book is not against women. He has cited references from 127 sources to support his argument which would certainly leave you in awe.

The book is divided into 4 sections. Each section explains in great detail the stark detail when it comes to inequality in pay, work etc to name a few where women enjoys an upper hand over men. The book begins with few interesting observations made by the author while he was traveling in a Mumbai local train, a bus in Kolkata, in the streets of Bengaluru where how men were treated by women in the name of weaker sex and the privileges attached to it.

Some of the statistics that he has mentioned would leave you in absolute shock which includes:

1. Of all the children raped in India, 57% are boys
2. Men commit suicide bout four times more than women
3. 84% of all homeless person are men
4. 39% of boys drop out of school compared to 33% of girls, in India
5. India ranks 3rd in the world when it comes to men taking a beating from their wife
6. Men are 79% of the homicide victims
7. Every 9 minutes, a married man kills himself because of the torture meted out by his wife
8. For the same crime, 163% of men serve in prison compared to women
9. 40% of domestic abuse victims are men
10. A married Indian man is twice as likely to commit suicide than a married woman

The above shared information are just a drop in the ocean. If you think, these aren't enough, there are more to come in this book. The book clearly shows as to how these so called rules and regulations were formed putting men in jeopardy.

By the way, the legs of women are 5.8% stronger than that of men(lean body weight ratio). Do you know this fact?

Studies also show, boys do not cry less than girls. It also shows, women have a much stronger immune system and live longer. With 2 X chromosomes, they have a backup copy compared to men's 1 X and 1 Y Chromosome which makes them resilient to hot and cold.

Looks like, we were made to believe that few of the Indian cities are not safe from women but when we compare the figures with that of other advanced nation, to our surprise, we would come to know that we fare much better than them and are placed comfortably in the "safe nation" zone.

"A man is a provider and the doer. He often loses his identity of a human being and becomes a resource".

How true the above words are..

A man does not fight back when a woman is attacking him. Author gives three probable reasons for this:

a. He does not want to hurt his partner
b. Social stigma of attacking a weak person
c. There are laws against hitting a woman (Unfortunately there are no laws for men being hit by women)

Author made few interesting observations which includes "A man is trained to control his expression. Ridiculing men is fashionable".

He expresses his concern in a subtle way where he mentions "Nature had no time to consider making a different type of body cells for men" noting that just like women, even men are fearful of heights, closed spaces, rats, cockroaches and so on.

The writing style of the author is vivid and clear. There is a form in Tamil poetry which is called "Vanja Pugazhchchi Ani". Author has used the same style to bring out his points.

This 226 page book has a lot more to give. What I have mentioned above are not even 1/10th of the facts.

Aren't there a remedy for men? There is.

If you want to know what it is all about, you must buy this book to find out more. Like it was mentioned earlier, this book is not against women but author is critical about system which has been set up in such a way drawing source from foreign nation which is no where relevant or applicable to our country and of course these were backed by so called NGO's whose major aim is to name and shame our great nation in the name of providing justice and equality to the so called "weaker sex"....