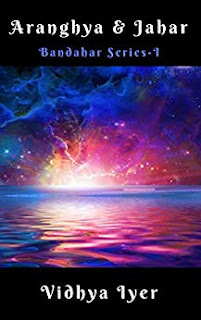 This is a novel which is set amidst the Bandahar's empire which was ruled by King Mithilesh. This empire was surrounded by few other smaller kingdoms like Dwadesh, Prathamesh, Aranghya, Jahar, Hirankund to name a few.

As was the case that existed in the past, there were treachery, betrayal and jealousy that has been knitted in this story in a right proportion.

Though the Emperor was strong and caring for the public and was blessed with a beautiful daughter Binodhini, he was cursed by a powerful sage because of which his health starts deteriorating. On the other hand, Dwadesh gets to face the wrath of the nature.

The charming Prince of Dwadesh, Prince Vikrant takes part in the contest announced by King Mithilesh and tames a tiger. He immediately gets noticed by Princess Binodhini. On the other hand, Ishanya, daughter of Sage Aranyawat attracts the Prince.

While King Mithilesh had different plans for her daughter, things take a different turn. Ishanya gets kidnapped and was taken to a far off place. She faces a life threatening incident.

Who did this?
What happened to her?
Where did the Prince go?
What happens to his Kingdom?

These are some of the questions which would keep readers like you intrigued till the end and just then when you think that the story sees its end, you would be delighted to know that the end wasn't the end actually but was the beginning of next chapter(Series II). Go ahead with this book. I am sure you would surely love it, especially if you love fantasy.

There are few things I would like to highlight in this novel.

1) A fictional tale which would take you back to the age of Emperors.
2) Despite of going back to the past, you would never feel even an inch of boredom.
3) Get to know about how the rulers ruled their nation and treated their subjects.
4) The writing style. It was unique and author has taken meticulous measure in describing each and every event in great detail.
5) Handling the subjects - a good applause needs to be given because it would make you feel as if you were there or you were the character.
6) Characterization and Picturization were done in an effective way which would make you feel as if you were watching a movie.
7) This is only the first part and hence the readers can rejoice since the second part is on its way.

This novel is available on Amazon

Read this book for its Bahubali like story, some reviews even draw comparison to the Mahabharata. There is a lot of suspense and mystery threaded into it. Most importantly it is an epic love story of Shikhanderi & Ishanya.