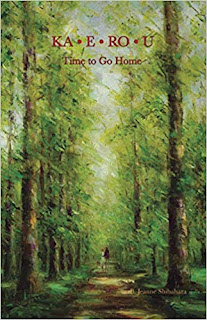 I was fascinated by this story. This is not the usual novel which you would have read earlier. The novel is a classic example of how the life of a Japanese would be as it takes you into their world through the author. Jeanne had written it brilliantly well that the novel would give you the feel that as if you are reading a poem.

The novel has already received some great reviews from the eminent which stands as a testimony to the message that the author was aiming to put it across to us.

The novel has few characters which predominantly occupies most of the bit which includes Meryl, a Vietnam War widow, Byron(Meryl's son), Greg, Kimi, Byron(Louis Cunningham's grandson), Freckles(Doberman), Elliott, Darryl, Jo, Fiona, Ono to name among the characters that plays a vital part in their roles.

The narrative was brilliant as it isn't the usual one being done by the authors from the US,UK,India or otherwise. Some of them did not fail to capture my attention which includes:

"Religion was for full bellies.
Happiness was only possible without hunger"

How true those words were.

What was also appealing was the usage of few extracts from popular poems in some of the chapter(you could find this on the top).

While I was pondering about what the cover pic was trying to portray, I understood the real meaning only after I finished reading the novel and came to know that this was done by an award winning Osaka based artist, Shinko Yamaguchi.

The story speaks about Love, Motherly Affection, Expectations, Disappointments, Pain and Ache which the war widows go through in their life in a very subtle manner.

A beautiful novel and those who seek something different - be it with genre or writing style, I would certainly recommend this.

Sarath,
Your praise for KAEROU overwhelms me.
Thank you.

Thanks for posting this heartfelt review Sarath. Kaerou does indeed seem to represent a fresh new voice in fiction, one that doesn’t quite fit into any standard genre. Not only that, but every single chapter within the (breathtaking) covers of this book reveals an intriguing surprise that teases readers to go further...deeper with Meryl on her journey.

Hello Sarath,
I completely agree with you about "Kaerou ".
The story it self and the way how Jeanne could rightfully present it are wonderful!
Lianna

Sarath, I completely agree with you!
The story it self and the rightly way to present it are wonderful!
I really recommend "Kaerou "!