When I received an invite to attend the #IBMDevDay at #Taj #Yeshwantpur, I did not think twice to accept it. I along with my friend Rajesh, had immediately booked our tickets to attend the event. 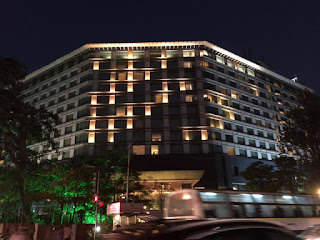 Shown above it the venue where the event was held all through the day - 14th March,2019

I was surprised when I reached the venue. Yes, there were few hundreds of programmers from various parts of the country had already reached the venue and it was buzzing with activities in various hubs that has been set up.This made me realize the magnanimity of the event.

I was instantly attracted to the Cafe Kiosk which was set up inline with the theme for the day. 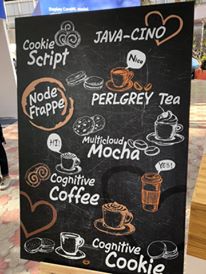 There were kiosks set up for various applications/services and all of them had lot of takers. These kiosks were handled by the respective specialists from the IBM. 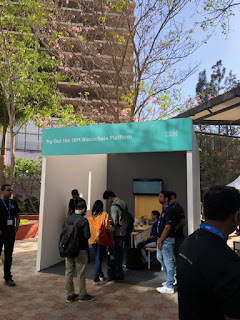 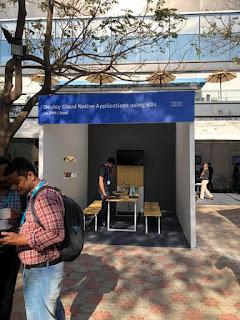 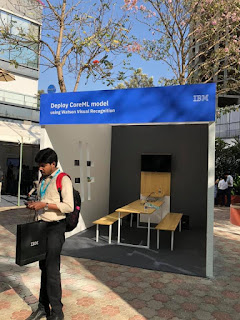 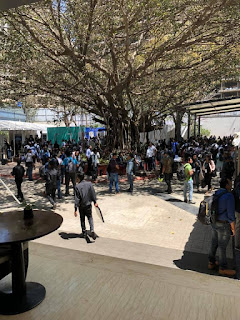 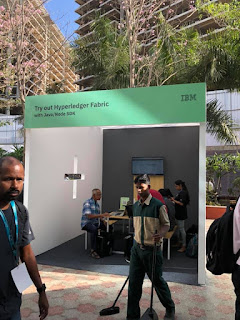 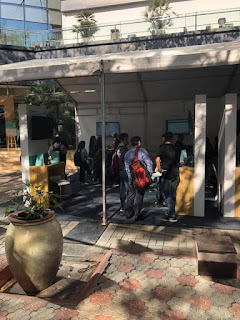 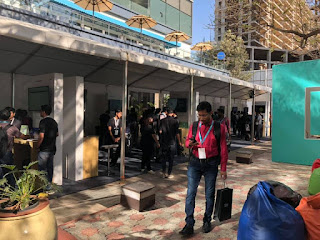 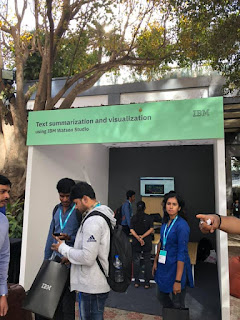 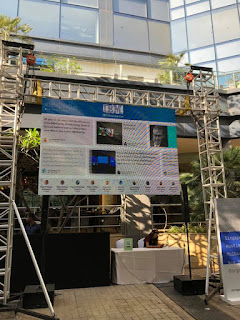 Our LIVE Tweets were displayed on the board shown above. Please note that some kiosks may wore a deserted look because the pics for those were clicked during the break time.

We all were called inside the hall/auditorium and the event began with a fun and frolic exercise. Once we were all set, the main event began. 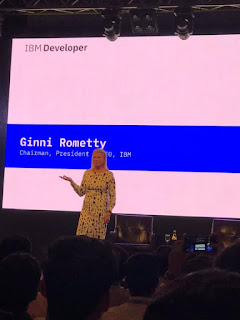 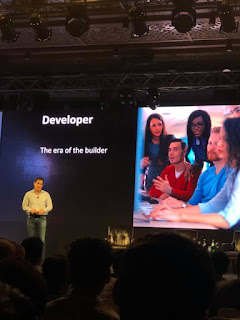 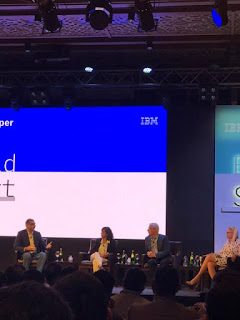 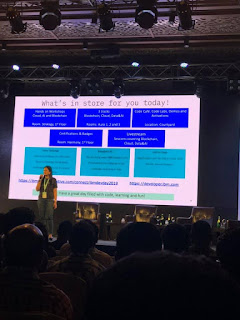 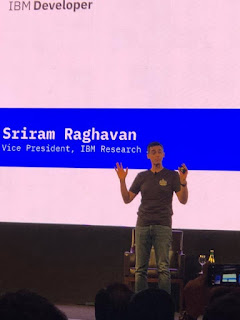 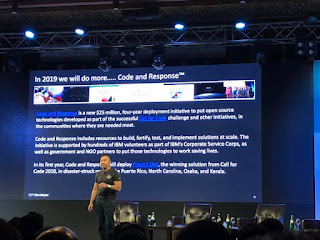 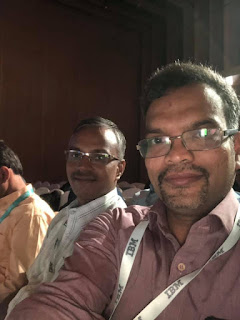 As you could see from the above pics, the event had the highest of the dignitaries attending it which includes Ms Ginni Rometty, Chairman/President & CEO of IBM,Priya Mallya- Country Lead,Development Eco System,IBM, Sriram Raghavan - VP,IBM Research, Willie Tejada, GM & Chief Developer Advocate,IBM.

Few short videos were played, in between the panel discussion sessions which were informative, innovative and touching.

1. Give back.
2. Open Governance and
3. Enable and Engage with wider eco-system.

Bob Lord,SVP-Cognitive Applications,IBM noted that there was no #CodePattern couple of years back. It is very easy to use. There are hundreds of cases available to be deployed on #AI, #Cloud, #BlockChain etc

Shradha Sharma of YourStory started speaking to the audience by mentioning in the very beginning that she is not a techie. She talked about how stories and PPT had made the life worse. She also spoke about how the country was built on stories forgetting the actual creators.

KS Viswanathan from NASSCOM said "Developer now is solving business problem and NOT the coder. Digital transformation has completely changed today's scenario. There are multiple ways available to solve a problem".

The hashtag for the event was #IBMDevDay #BuildSmart

There were lot of things that was discussed during the event. This includes:

Though we may have had a different notion about the capability of the above mentioned services, we were dumbstruck when we were given all the information in detail which has even helped rebuild the devastated Nepal, after the massive earthquakes, it was hit with. Rebuilding homes is made possible by just spending 20 to 30% o the actual cost. It is to be noted here that more than 5 million homes were lost in natural disasters and calamities in the past decade or so. There is no technology which could stop natural disasters but can help in predicting it in advance and be prepared to face the same. 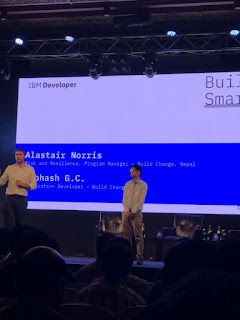 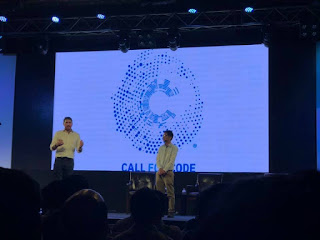 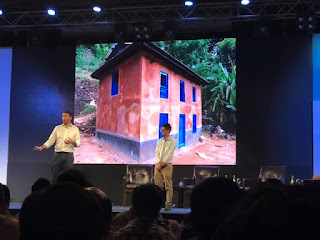 Once the main session was over, where lot of discussion took place which has kept the audience captivated till it got over, we were given a break. Post that, participants were asked to enter the halls that were now segregated into above mentioned 4 topics. I chose to enter the hall which was discussing about Cloud. 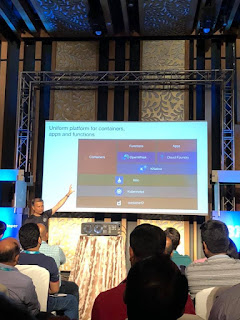 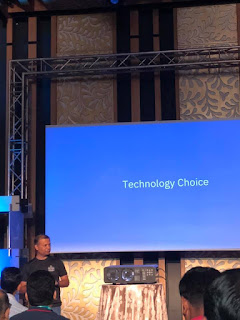 This session was handled by Girish Dhanakshirur.

Post this, we were given lunch break. After our lunch, we were joined by few other bloggers and SME's for a closed room panel discussion session which saw the presence of Pradeep Balakrishnan, Malathi, Omi Swati Gandhi, Neha Sobti. It was a good one hour session where we all got to ask questions and got the answers from the experts/officials from IBM, direct. 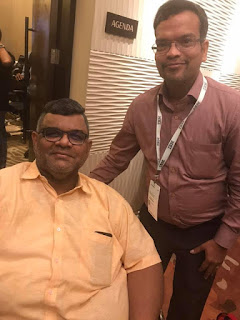 The event ended with a brilliant band performance from LAGORI. 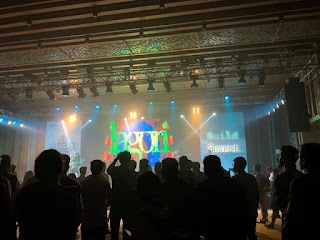 What were the takeaways from the event?

1. IBM is the global leader in Cloud Services.
2. IBM is investing heavily across various verticals.
3. IBM has conducted more than 300 events last year alone across various geographies.
4. IBM is working together with RedHat even after the acquisition. They both complement each other since they are the ones who have institutionalized Open Source.
5. Open Source isn't FREE. They are Safe and Secure.
6. IBM offers Public Cloud, Private Cloud and Hybrid Cloud.
7. IBM Cloud Platform can be used by the users who couldn't afford find relevant tools for distributed application.
8. IBM would be more than happy to associate in community participation.
9. Mumbai Stock Exchange runs on IBM Cloud.
10. Rashtrapati Bhavan has deployed IoT.
11. IBM welcomes developers to contribute to Code Patterns.
12. IBM is involved in Academic Initiative where it is collaborating with Schools and Tier 2 & Tier 3 colleges to set up Centre of Excellence inside their campus. The sign up can be done online for FREE.
13. IBM offers "Call For Code" program for students/developers. This is basically targeted towards students who are below 18 years of age.
14. IBM has launched "India Developer Champions" to spotlight developers behind the Code in India.
15. The prize money for "Call For Code" contest which is exclusively announced for India is US$200,000. In global level, out of 100,000 participants, almost 50% came from India.
16. Only 20% of business uses Cloud with the remaining 80% to be tapped.
17. Centre Of Excellence has been set up in Bengaluru by NASSCOM in association with IBM.
18. AI-ML is free program as of now.
19. Under #DevelopeChampion program, only 25 from few million will be selected. They would travel across India and Abroad to attend various programs.
20. IBM donated US$1 billion to Linux 20 years back.
21. IBM believes in building a smarter future not just for few of us but for all of us.

Couple of important links you must visit ->