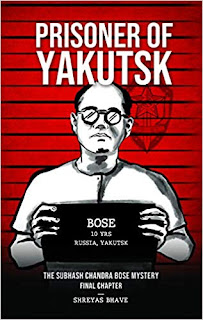 There are few incidents which has remained a mystery till date. It is because of this, people are still intrigued by those events. The death of Netaji Subhash Chandra Bose is one such event that has always been a point of contention/discussion even today. There are lot of mystery around the disappearance of the National Hero and even though lot of inquiry commission had been set up, none had revealed the truth till date.

Even the "RTI" Act wasn't helpful since those who applied for information under this received a reply saying "Information was Classified. The revelation of information would jeopardize the relationship with other Nation"

Shreyas had taken this intriguing subject and presented the novel in his own style. He has used few real characters and few imaginary characters in his novel to make the story look like the real one. The sequence of events would make you to keep hooked to the story from the beginning till the end.

The story is set in two different periods - 20th and 21st Century. While a team has been deployed by the then PM and Dy PM to go in search of Netaji, they stumble upon truth which has been kept concealed by the Govt and various authorities. On the other had, a multi millionaire(Jay) sets on a journey to find information about his missing mother . He is joined by an hacker(Tanya Williams) who had connections with Julian Assange. They travel to various places including Hong Kong where they meet Sasha Maikijan whose son is a Gangster.They were followed by couple of Russians(Sergei and Charkov).

What was Jay trying to find out?
Why would Russians follow Jay?
Who is Tanya and why did she agree to help Jay?
Who is Sasha?
Was the disappearance of Netaji been decoded in the end?

Read this story which would keep you captivated till the end. A different perception and approach towards the disappearance of Netaji which makes this novel, a unique one.