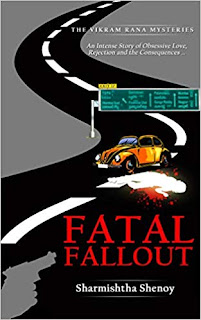 Vikram Rana series by Sharmishtha Shenoy is a HIT among the readers and those who have read her previous works wouldn't have missed grabbing this book as soon as it got released.

Sharmishtha has a unique way of describing her stories. It is lucid and does not deviate from the core story. Written in simple English, her stories can be grasped by anyone literally. No one, once picked up the book would stop before finishing it.

Fatal Fallout is a suspense crime thriller which would keep you guessing as to who the real culprit is. Actress Gauri, an upcoming artist gets murdered on a lonely road. Her valuables gets stolen. However, prior to her murder, she gets manhandled by her over possessive lover, Akash who also happened to be the son of a Minister.

Was Akash responsible for the murder since he comes under the radar of Vikram Rana when he starts investigating the case along with ACP Gopi Reddy.

On the other hand, Inspector Phani Kuma who was initially alerted about the case by constable Anil was also under the radar as he was known for his closeness to the Minister and was trying his best to get Akash away from the suspicion ring.

Gauri was also close to Director Madhav. He proposes to her during one of the film shoot. Was he responsible for her murder?

The story revolves around all these characters raising suspicion with each and everyone but the end was a real unexpected one. What makes it even more appealing is this book is now available for just Rs.125 on Amazon as against the listed price of Rs.299. The Kindle version is FREE, if you are on Kindle Unlimited Plan.

What are you waiting for? Go and grab your copy today.

Thanks for the wonderful review!