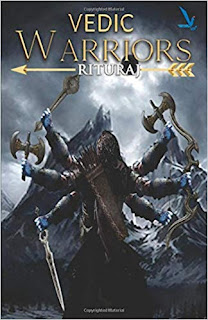 Firstly, I would like to mention that I was totally surprised as to how the story has unfolded. This wasn't the usual story line where you predict something and see that coming true. I failed miserably in more than one place where I predicted something but it never came true.

Cover Page needs a special mention as it is perfectly coinciding with the story line. This would give you some idea as to what this story is all about. The story dates back to the era where only the swords, arrows and spears were used in the battlefield.

Taraksh, a mighty and a ruthless Emperor conquered almost the entire world leaving Nakshatra which was the Union of Seven Kingdoms and had the legendary twin brothers - Zekrar and Vedhas. They were touted as the strongest warriors who could not be defeated, when they fought together. On the other hand, Nirmay and Apykarych, the generals of Taraksh along with Shrestaha, the legendary priest of Mahaverna(also the half brother of original King Namaha) hatches a plan to bring the Armour which was guarded by Mahayogishm.

They get joined by Jivraj, who is the master of the seas. The story takes you to a journey which would keep you captivated till the end.

Did they get to lay their hands on the Armour?
Why was this armour so important?
Who emerges victorious in the end?

The story has captured the essence of greed of power, victory, treachery, love in the right proportion. All I can say is, this is the Indian version of Avengers :-)