Book Review - God of the Sullied 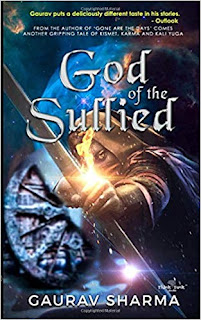 A good novel with a different story. I initially thought that this is the same Ekalavya who was in the epic - Mahabaratha but then I realised, it wasn't the same. Ekalavya, the protagonist was born to Vyas and Sumati. As soon as he was born, his mother dies and his village gets flooded. Though Maha-Purohit prior to his birth predicted that he would change the course of the world, later announced that he was Sullied.

Being sent to Gurukkul, Ekalavya gets trained by Acharya Bhushan and Acharya Virbhadra in self-control dharma and combat. However, another person Acharya Kaushal did not like him. In the meanwhile, his granny dies and his father is left out as the single person in the family.

The debate that happened between Ekalavya and Acharya Kaushal is an interesting one which shouldn't be missed.

When things were not going well for Ekalavya, he gets to meet Mohammed and Mahavir. Though he did not knew them, they knew him well and those events turns out to be a game changer in his life.

When he faces an imminent danger, he gets saved by Pundir and Tara. Few incidents happens later which changes the fortunes of Ekalavya.

What happened in the life of Ekalavya?
Was he the real scion of Ikshvaku?
Did the image "Sullied" shattered from his life?
Who were the two mysterious guys?

I felt that the story was elaborated a little more than required making it a bit bored half the way. Otherwise, the writing style and characterisation were the advantages for this novel which would make you read, at least once....