Book Review - A Year Of Wednesdays 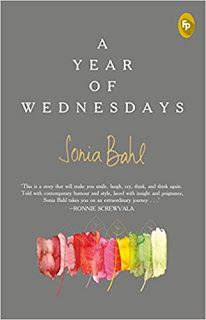 Sonia Bahl needs no introduction. She writes for movies and has also written for few ads. Her debut novel "The Spectacular Miss", was optioned by a leading Bollywood studio and she was commissioned to write the screenplay.

In this new novel "A Year Of Wednesdays", the author has shown her class by penning a novel which happens on Wednesdays throughout the year. I did search for the number of chapters and it was almost close - since a year usually has 52 weeks and presumably 52 Wednesdays whereas the novel has 46 chapters. So, I can say that this has justified the occurrence of the story over a period of a year.

Coming to the story. The story can be said in 2 lines. However the way it has been elaborated has made this novel, a real special one. As you could see, the renowned Ronnie Screwvala has said "This is a story which will make you smile, laugh, cry, think, and think again". Initially, I was skeptical about these claims but as and when I started reading the story, I was pretty much convinced that this novel certainly deserves all that praise.

The story coincides with the Japanese term Ichi-go ichi-e which stands for "One time, one encounter, lasts a lifetime".

The style of writing and expression. You usually wouldn't find a novel which uses a high level language. This book is one. That doesn't mean you would have to search a dictionary to understand the meaning of a word/sentence.

Sequence. They are classic. It kind of reminded me of those classical Hollywood movies which were received well just for being conversational.

Characters. The roles played by two protagonists who were seated next to each other on a fifteen and a half hour journey. They lived it. It gave me a surreal feeling as if I am watching them LIVE.

Lord Buddha's Golden Words "If you love the life you have, you have everything you need" is pretty much apt for this story.

The story is about us. YES. You read it right. It has an instance where the protagonist was forced to be on family WhatsApp Group despite having 35 members. She was married to a Muslim man even though she was not born a Muslim. The book emphasized the importance of being together which brings happiness - be it the celebration of Christmas, Diwali or Eid.

The journey which took the characters seated on seat 7A and 7B to their destination had a long lasting effect where they had to think about one another despite being busy in their own lives - one being a Investment Banker and the other one being a Mom of a toddler.

This book is available on Amazon in Paperback format for a special discount of Rs.199(instead of Rs.299)