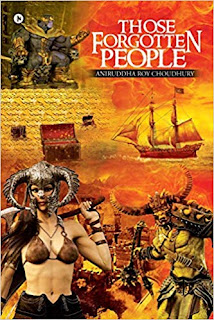 Initially when I saw the book's title and it's cover, I opined that this book is all about history. I came to know sooner or later that it wasn't the case but a novel with the combination of fictitious and non-fictitious characters. Only a few has succeeded in combining both, so far and the author is certainly one among them.

I was also surprised by the bulky nature of the book. Yes. The book runs for 500 odd pages. After finished reading it, I felt that it could have been made into (or released) two parts which still could have evoked greater interest among the readers. Nevertheless, here is the novel and if you a reader who loves fiction and history with some sci-fi factor, you would rejoice.

The novel begins with the disappearance of seven ships. These ships were carrying enormous treasures(details can be found in the book). They were:

Then the story goes to present day where Sudhir Bagaria, the protagonist who despite being suffering from ADHD, had managed to have a well built body and stamina. His wife deserts him citing his incompetence in life. When things were going awry, Sudhir, through his honesty and talents starts rising up the ladder in his corporate job.

Just then, an accident happens and he gets stranded in an island. When he thought that everything was over, he stumbles upon a marvelous palace which is in shatters. Things which are beyond his comprehension starts happening inside the palace and he was convinced that all those weren't illusion.

What is special about this palace?

He also stumbles upon letters written by King Cherusseri Namboodiri of Nair Dvipa to his son Prince Hanuman.

Who is this King and what are the significance attached to the letter?

Sudhir meets local tribe group and he becomes one of them. Why did they accommodate him ?

Just when he discovers something important, he has to face an Himalayan task of facing a dark force called Mogui.

Who is this Mogui?
What he has to do with Sudhir and island inmates?

Read this story which would keep you captivated till the end. I loved the way, author has imagined and weaved a perfect story which ends on a happy note.

My Conclusion - This book is a MUST READ!!