Book Review - A Story And The Man 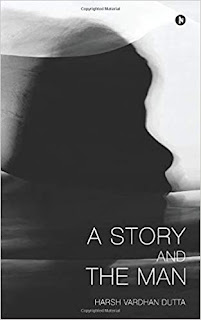 
This is a story of revelations which would take you back to your schooling days. The beauty of the book lies in the character of Protagonist, who remains a mystery from the beginning till the end. When I say it, there is a strong reason behind it which you wouldn't know until you read the book yourself.

It all begins with the protagonist working in a private company owned by one Mr Lalaji who was a shrewd businessman. Despite of having 200 staffs, he never had HR department in his company and all the appraisals and pay hike were decided solely by him. Corporate culture has been vividly captured in this story without any exaggeration. Since I myself had worked in an MNC Corporate for almost 8 years, I can certainly vouch the authenticity of the events mentioned in this book.

There were certain peculiar characters like Doctor Sa'ab which we a would have witnessed in our work place. Our hero few friends in the office which includes Mahesh, Jagdeep and then there were few women who came in his life - Akanksha, Tanya, Riya, Mira, Mansi among others. The hook-ups he had with each one of them were warranted by the events/incidents that very much required it.

Then, we get to go back to his schooling days where he was close to Manish and Abhijit. This is a complete turnaround which shows the stark reality of the life of an average(or not so brilliant) student. This particular section would give you goosebumps especially, if you belonged to that category back then.

Then, there is this spiritual part. Why and how is the protagonist involved in this?

Who is he?
What makes him special?
Is he a Play Boy or a Self-Enlightened Soul?

Grab the book. Read the story. Get ready for lot of surprises. Most importantly, figure out who the protagonist is...