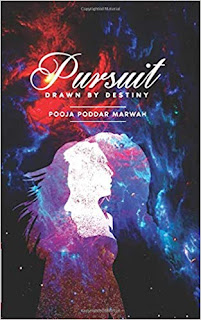 A well written story. Though the core is simple, the way the author has taken this story certainly deserves an appreciation. Firstly, I was impressed with the cover which portrays lot of meaning. It shows how both the sex - Male and Female are embodied within each other. This should be seen not from the aspect of physical intimacy but that of the universal truth.

I loved the way the story was narrated. It is elaborate and has captured the emotions of the protagonist - Kate Princeton in a way that could not be described in words. Kate had a break-up with Adit and vowed not to fall for any men. She owned a company called Semicircle Entertainment which was into event management. Her parents were happily settled in the US where they ran a restaurant called True Desi. She had two sisters - Riya & Shaila.

Riya lived in Los Angeles and was a news reader. Shaila lived in New York and had her patisserie named Sweet Seduction.

Kate was getting a weird dream and she couldn't believe it until she met the person in real - Edward Scott who owned Scott Holdings. Though he was married to Natasha, she was having an affair with Jigs.

Was Edward aware of it?
How did Edward and Natasha meet?
Was she convinced that he was the soul she was searching for?

She had a close friend named Jiya. Though Kate liked Edward, she felt insecure about him as he kept vanishing every now and then.

What is that which Edward kept hiding from Kate?
Why was he vanishing?
Did he had a secret past?

Though this is a hard core romantic story, the last ten percent of the story has a thriller quotient attached to it. Yes, this is a usual love story but isn't the one you thought it would be....