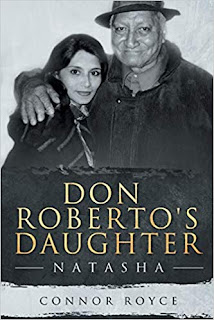 Firstly, I must thank the author for coming out with such an excellent book which captured the emotions of a long distance love, so well. When the countries involved in this beautiful love story is none other than USA and Mexico, you now for sure that this would be an interesting read.

Before I could go about posting my review about the book, I must admit that I was overwhelmed to learn few words in Spanish which includes:

Chica Moderna - Modern Girl who is independent and strong
Mucho Gusto - Pleased to meet you
Esta Grandote - Huge
Ay Jole Mano - Truly a Conspiracy
Calmate - Calm Down
Bueno,Entonces.Adios.Hasta Jueves - Well, good-bye then. Until Thursday
Un Poco - A Little
Estas Hermosa - You're beautiful
Estas Mi Novia - Are you my girlfriend?
Mijo - My Son
No lo se - I don't know
Dios Mio - What do I do?
Cuanto - How much?
Quince - Fifteen
Suegro - Father-in-Law
Don - Out of respect((Title)

The above mentioned are just a few. There are more words and I did not cover all of them in detail, here. It would be apt if you buy the book and find it on your own.

Natasha, the protagonist is from Mexico. She came from a loving family.Her siblings includes Cesar, Scarlet, Lucio. She was also called fondly as Niki. She comes to Fort Worth in USA on the insistence of her sister, seeking better fortune. She gets to meet her sister's friend Sofi. Sofi had a 4 year old daughter Jazzy. Jasmine and Yolanda were the room mates of Sofi. They never liked Natasha - Yolanda in particular.

Daniel, who was the manager of the restaurant where Sofi worked allows Natasha to work in a pizza shop called Duffy's in the evening. This is where she gets to meet Sean and both of them gets attracted to each other on the very first meeting. It took few more meet before they propose each other. Natasha had a boy friend names Luis, in Mexico and they parted ways due to some misunderstanding. Sean had a son named Keegan from his previous marriage.

When things were going in favor of Natasha and Sean, she had to go back to Mexico to attend a wedding. She falls sick. Back in USA, Sean has an accident which puts his job in jeopardy. At the same time, Luis comes back offering a plum job in a big Govt company through his contacts. He also tries to impress her mentioning about his job as well.

What happens now?
Did Natasha accepts the offer from Luis?
or
Did Natasha says YES to Sean?

The story is a perfect culmination of two different cultures(note here that Sean thought that Natasha was a Catholic but she reveals, her mother was one. She and her Dad were Protestants).

Did this come as a hindrance in their Love?
Did Sean find a new job?

All these questions will be answered in the book. I must say that this is a very good attempt by the author who has captured the emotions that goes through the family of a girl in Mexico and it also shows as to what the American guy has to go through. An enjoyable read, for sure.

This book is available on Amazon in both paperback and kindle format.