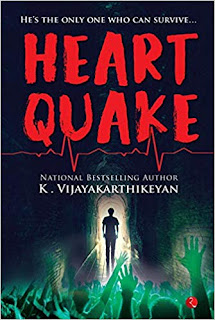 After releasing best sellers in Tamil and English, Dr.K.Vijayakarthikeyan is back again with a thriller. This medico turned bureaucrat has shown his writing skills yet again which has combined his profession and that is perfectly imbibed in this story. The story revolves around the bunch of IAS officers namely Shamitha, Shankar, Jaidev, Vikram and Rakesh.

Vikram plays toe role of the protagonist. When he collides with a powerful politician named Rudra Pratap Rana aka RPR, things takes a different turn. The story is a stark reality of what usually happens when there is a tug of war between a Politician and a Bureaucrat.

Why did Vikram collide with RPR?
What was the outcome?
Was he made a scapegoat?

When the reader would be busy in finding the answers, there comes another twist in the tale which surrounds unexplained deaths. Again, this incident leads to lot of other outcome which is usually the case in the real life scenario as well. Yes. The story is a fiction but the content in it is no less than a non-fiction, albeit it might not have happened as it is.

Everything falls over Vikram who uses his knowledge and skills, being an IAS officer and tries to track and hunt down the criminal. He gets to see witness some nasty surprises when he unveils the faces behind it. The story also revolves around his family who gets unnecessarily dragged into the controversy. This would fit to be made into a movie as well for the fact, it has the composition of thrill, grudge, revenge, family emotions and even a love story. Yes. Vikram falls in love with Dr Veda Agarwal when he meets her coming out of RPR's house.

Is Veda related to RPR?

The author has shown a good variation by having the right mix of all the emotions and has given equal importance to all the characters. While there was a brewing love between Vikram and Veda(not the movie), he was also surrounded with lot of unanswered questions that were related to untimely demise which arises suspicion among various other characters. When dark forces are behind, what would an unsuspecting officer do? He continues with his investigation.

Was he able to do it?
How was this crime orchestrated?
Who was the brain behind this?

Read this gripping novel to find out the answers. I thoroughly enjoyed reading this book and you too would be, beyond any doubts...