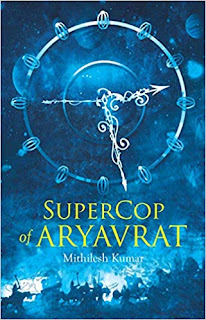 An excellent portrayal of one of the greatest epics of all time - Mahabaratha.

We all would have read about this in various forms. Some of them were real bulky. This is a 286 page book which has captured the essence of the epic in a way that is most appropriate to 21st Century. I was really delighted to read this book for the fact he has rewritten the epic without changing the story but at the same time, made it more appealing.

The protagonist of the story is none other than Lord Krishna and now you would have got to know as to who is the Super Cop. The story revolves around him - right from HIS childhood till the end of his human form in this Earth. I was glad to get to know as to when this has actually happened. This has happened in 3228 B.C.

What I had seen in the television was more of super natural powers The Lord possessed which were used to destroy the bad elements. In this book, it all happens in such a way that they all looked real and would make you think that the events would have happened as it was portrayed in the book. I can given an example or two. Pootana kills herself by drinking poison(it was shown in the television that Little Krishna sucks her life out when she comes in disguise to feed her) and another notable event is making the giant serpent(Kaalinga) to repel his mistake and retreat to seas. The events that were described were so real/natural that you would not beg to differ or disagree. I would say this is the element of success for this book.

Author has written it so well that you wouldn't feel bored reading this book despite knowing the whole epic and would have seen/read it many times. Style of writing is fluid. There was no deviation from the original story but he has succeeded in making this version, a real appealing one....