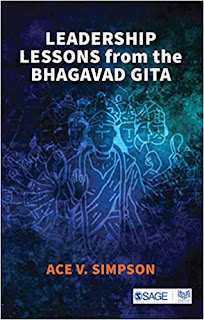 Bhagawad Gita is believed to be the discourse of worldly information given by none other than Lord Krishna(Avatar of Lord Vishnu) to Arjuna(one of the 5 members of Pandava brothers) in the battlefield when the latter decided not to find against his cousins despite knowing the fact that they stood for "Adharma". It is this discourse which enlightened him, making him to fight and defeat the Gauravas/Kauravas.

The book has been deciphered in various forms from time to time. Each one of them gave a different way of approach to the "Gita" and has never failed to wow me. However, this time, when I picked this book, looking at the description, "Books for a Happy Work Life - Leadership Lessons", I was bit skeptical as to how it would differ from the other. Most importantly, what sort of leadership skills would be deciphered from the book. I have read the book, a long back and had never failed to pick up books written by various authors on various interpretations.

Trust me! This book is certainly one of its kind. True to its title, the book has done a proper justification and lived up to my expectations. This 300 odd page book is a treasure trove because I don't think I have come across any other book which has simplified the Gita itself, in the first place, by getting the important verses translated into English, coupled with interpretation of Leadership Skills in such a subtle manner.

Firstly, it was the concept in itself. This was different. Appealing. Most importantly, applicable to the present day.

The book is divided into three parts:

Each part is divided into 6 sub divisions and each one is a GEM!

I was floored by the introduction part which was so full of information. If you ever think that you knew everything, BEWARE! You would still learn a lot from this book. I could see how meticulously author has researched this book thoroughly to put forth the points which couldn't be at fault, at any point of time. This in itself needs appreciations/applause because it isn't easy to make a book out of the book which is a trusted source for Millions of believers in Hindusim. By deciphering it, author has made it a common one for other believers as well. Many of the literature originated from India on various languages in the past were Universally applicable. Gita proved it, yet again, as one.

I took lot of notes to mention it on my review but then I decided to keep myself silent as it may become a spoiler and most importantly, I felt that the book should be bought and read to grasp the content which is more or less like a nectar. It would be even more effective, if you read one sub-chapter a day. There is a quote by famous personalities in each of them, in the beginning, followed by an Overview and then Prologue coupled with Reflections. In the end of every sub chapter, there is a Summary.

There are few tabular columns as well. I would highly recommend you read/grasp it without skipping it. There are also few pictorial representations which adds more value to the content. If yo have the habit of reading Gita, once in a while, in its purest form(in Sanskrit) and unless you are aware of the meaning of the content(which I doubt that would be the case), I humbly request you to refer to this book.

A real good attempt by the author which certainly needs all our support and appreciations.