Book Review - A Week In The Life Of Svitlana 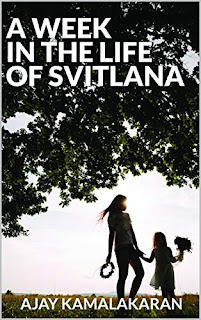 This is the second book of Ajay, I have read till date. His first book was completely a different genre and this one swept me of the content, it had in it. Ajay is known for his connections with Russian soil and hence drafting a story based on the life of a girl in Russia was never a problem. He recreated the magic yet again. This time, it was Svitlana, who hails from Ukraine but lived in Russia. She had dual citizenship and hence living in Russia was never a problem.

The story takes you to the life of what it is to be in Russia. Svitlana had coupe of failed marriages and she was facing trouble in raising her only girl child. Though she was employed in a luxury watch store, she was not getting enough to make her ends meet. She was attractive and when it comes to work, she gets is done by carefully choosing the words and help the store in selling some of the highly priced luxury watches.

Life is the same even in Russia. Though from outside, you may not find any beggars as such, there are lot who still lived in poverty. The stricter law, language barrier, troubles faced by beautiful/attractive women were captured very well in this story.

While Svitlana receives proposals from various men, one was real serious.

Who was he?
Did he able to win her heart?

Read this story which would take you deep into the lives of a Russian.