This restaurant is located in the Ispahani Centre. My sis & I reached the venue by around 12:15pm & was surprised to find that there was “No Parking” for our 2-Wheeler. Thank God! I did not go on my 4-Wheeler. After some searching all by myself, I found a parking space opposite to ICAI. Relief 😊
Weather was pleasant outside. Hence no complaints about that. As soon as I entered the restaurant which was on the ground floor - just on the left, we were welcomed the the restaurant staffs.
We took the corner seat (since by then we never knew that they had 2 floors - 1st & 2nd). We were amazed by the interior which were done & resembled the typical Dhaba. Yes. That’s Dhaba in the city. The lightings were Colorful & Attractive. Some chandeliers were made of glass bottles. Then comes the painting which were as Colorful as the lights. Then there were frames - frames of some anecdotes, wordings & Bollywood movies.
As we went up, we were surprised to see that the restaurant had received quite a number of Awards(commendable).
The vessels were of copper and they used earthen vessels for serving water, Shorba among others which is a welcoming move.
Staffs were attentive & explained it in Hindi/English about the dishes. We also had a good chat with the Restaurant Manager Mr Raja Kumar & Chef Kamal (who is from Uttarakhand). He did an amazing job through his culinary skills which is covered in the next section/post 😊
P.S. Be there early coz the restaurant gets crowded real fast and today being a Friday, there was a decent crowd. 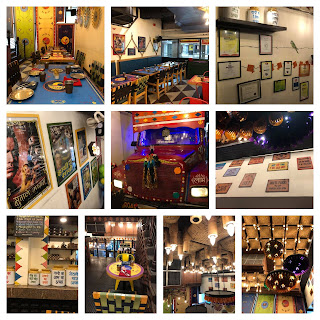 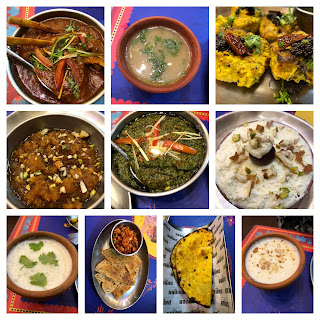 Firstly, we were served with Masala Papad. They were nicely fried and the masala was hot. Remember, it is winter special.
This was followed by Shorba. We loved it as it tasted real good. There were 4-5 chicken pieces in the bottom. Yes. They were cooked well. This Shorba, I can say, is Unique!
Sarson Fish Tikka followed next. We noticed there were lot of mustard seeds on the top. Initially, I thought of discarding them but then decided otherwise. It was deep fried and tasted real good with the fish.
Butter Milk & Sweet Lassi followed next. They were thick in texture and tasted amazing.
Then it was time for Main Dishes.
We ordered Butter Naan & Mutton gravy (Pind Di Chaamp aur Boti). I was floored by its taste. It was so good that we finished all the pieces and did not want to let go the gravy (since Naan was over).
This was followed by Makki Ki Roti which was served with Sarson aur Subz. It gave a different dimension to our taste buds. It was accompanied by jaggery pieces & white butter. Do not miss this.
Finally, for desserts, we ordered Badam Halwa which was full of ghee. Dhabe Da Meetha is their specialty dessert. So, if you visit them, do not forget to order this.
What I also noticed is they served Hot Water. It serves two purpose - enhancing digestion & making you immune from cold/flu.