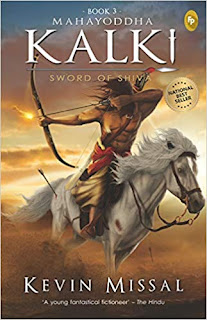 
Mahayoddha Kalki is the third and the final book in the Kalki series by Kevin Missal. Those who have read the previous releases will not find it difficult to follow the story. If not, I would highly recommend to read the first two prior to proceeding with this. This isn't a hard and fast rule though because, if you are good with in reading and grasping the details, you can still manage to understand the story by buying this third book, direct.
There is a difference when it comes to writing a fiction and a non-fiction. While the latter is based on facts which cannot be changed. It can be told as it is or with some addition(without changing the actual context). On the other hand, fiction needs greater attention especially when it is released in parts. This is because, the story has to be perfect and the characters should be linked without any overlap or otherwise. Since readers are real good in grasping the contents, even a small error could be picked up by them and highlighted.
Kevin, who had his struggles like others when he was a kid has went on to become a National Best Seller with his Kalki series. It did not happen overnight. Each and every book in this series runs for not less than 350+ pages which means, the raw version would have been almost twice the size, if not more. This isn't a joke.
In this third book, you could expect the unexpected. I was literally shocked when I realized as to who was "Adharm". While we(the readers) had a notion about someone else in this place, the real one came as a shock. There are too many characters in the story but yes, if you have read the previous books, you wouldn't find it difficult. Moreover, if it is about an historical fiction, these are absolutely necessary.
The Naga Queen Manasa was trying to kill the Yaksha King Nalakuvera. She was ably assisted by Airavan and Captain Jaratkaru(who was serving them since Lady Kadru's reign).  It was Manasa who defeats Kadru and saves Tarakshya. She forms an alliance with Vibhishan.
There was a parallel story involving Padma - Daughter of Vibhishan and Bajrang.
Nalakuvera makes Arjan, the King. Ratna Maru also wanted to avenge Nalakuvera.
While Kalki and Arjan were the brothers, they were in different places fighting their own wars. It was an unexpected twist when you come to know about their relationship with Kali, the erstwhile King of Indragarh. He voluntarily comes to help Arjan though Arjan badly wanted to kill him for the loss of his friends. He deploys Danavs- the 20 foot giants to fight against the Naga Queen when their kingdom was attacked. Were they able to win the war?
Then there are Maruts who are now called Rudras and Jambhavan, who believed to have the strength of 10,000 Lions. Kalki wanted to kill Jambhavan.
Why?
The fight between Yakshas and Nagas reminded me of the characters - Werewolves and Vampires who were always at loggerheads.
Did Kalki able to lay his hands over the Powerful sword of Lord Shiva?
Did Manasa able to defeat the Manavs?
Why was Guru Narendra not happy with Arjan being crowned as King?
The story takes a lot of interesting twists and turns as and when it progresses making it a compelling fiction and let me alert you that you wouldn't have realized that you have spent a few hours to complete reading this book.....


This book is available on Amazon in Paperback format. Also available on all leading online and offline stores.