The #FruitMixing event which took place today in Novotel,Chennai OMR was certainly something I would cherish for my lifetime.

It was a well organised event.

We reached the venue sharp at 11. We were given a warm welcome followed by a LIVE Session with Chefs who prepared some steaks made with Chicken, Fish, Pork & Tenderloin. Yes. The hotel is launching #NovoSteakHouse shortly which is touted to be OMR’s First Prime Steaks.

It was a real interactive one since it saw few of the participants taking part in the event, enthusiastically.

Post this event, there were two separate set ups arranged for fruit mixing. One for the kids & one for the elders. The fruit mixing done by kids never had alcohol mixed on it whereas for us, lots & lots of alcohol were mixed which will be allowed to ferment and be made into a cake 🎂 before Christmas. 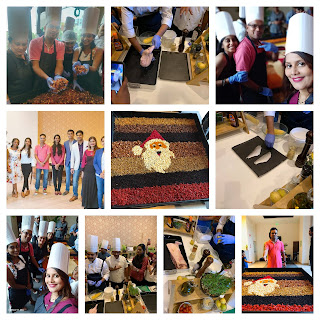 We learnt few things about the Cake from the Executive Chef Mr Ganesh Kumar. We came to know that the reason why there is a protective cover over the plum cake is to extend its longevity since those days, travel took lot of item. We also came to know that the raisins were earlier known as “Plums” and hence the name.

We mixed all the ingredients like Berries, Cashews, Almond, Tooty Frooty along with alcohol. We ensured the mix was done properly. Cleanliness was ensured wherein we were given apron, head gear & gloves for both our hands. I’m sure, a tasty cake is on it’s way for all of you this Christmas - only at #NovotelChennaiOMR