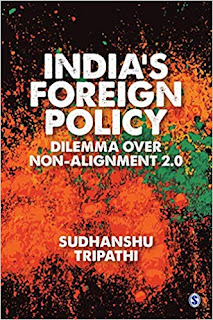 If you are a political science student or the one who is interested in International relations, this book will come as a boon to you. I picked up Commerce/Economics group during my high school out of sheer interest and excelled in them including the law papers in the University level and also during the CS(Company Secretaryship) - Intermediate Examinations. Hence I do know the importance of these which forms the basis of strengthening the nation.

It was good to recollect my memories about India's present foreign relationship policy which is based on "Panchsheel" formulated by the then PM of India Shri. Jawaharlal Nehru. Though it is still relevant to some extent at the present moment, they way in which it could be improved has been explained really well by the author.

The author, Sudhanshu Tripathi, who himself is a Political Science professor in Rajarsh Tandon Open University(UPRTOU) and Director(Incharge) at School of Social Sciences, UPRTOU has proved his expertise by comparing the relationships of the past with the present. Th bibliography in the end alone runs for close to 20 pages which shows how much of references were sourced from hundreds of books written by eminent in this field. These were presented coupled with his expertise knowledge which shows that it is time for India to move beyond. The comparison between the action/step taken by Shri. Jawaharlal Nehru with that of Shri. Narendra Modi needs a special mention.

Though author is not critical about any of the actions taken till date, he puts it subtly that the steps taken by the present PM with regards to strengthening the ties between various nations including Israel, Iran, Arab Emirates apart from maintaining a cordial relationship with USA, Russia and China shows as to how informed the PM is. It is also a testimony to his achievements that he has been bestowed with so many awards by various nation. The aggressive "Chauvinism" policy adopted by the BJP has yielded some results. Unlike their predecessor, they are not keeping quiet but get into action be it response to Uri / Pulawama Attacks or Kargil War or destroying the terror camps as soon as Wg Cdr Abhinandan was released by Pakistan.

India still has a long way to go with regards to modernizing the weapons. Author points out subtly that only with the support of these, a nation could ascertain its supremacy over various issues. You must note that he is not advocating the weaponization but has put forth his thoughts as to how important this is as it cannot be ignored or taken lightly. The "Make In India", "Digital India", "Smart Cities", "Startup India" finds a mention in the book.

Various internal and external factors that affects India's foreign policy and ways in which India could improve its relationship with neighboring countries especially with China is explained in detail in this book. By the way do you know that PM Narendra Modi was the first to visit Mongolia, Nepal(after 17 years since the visit by the last PM), Sri Lanka(after a decade), Fiji(after 33 years), Canada(after 40 years) and so on. These signifies that India is already in the right path of enhancing the external affairs relationship which would go a long way in strengthening the bond/ties with the other countries. It is high time that India starts considering about the Version 2.0 of Non-Alignment Movement(NAM)