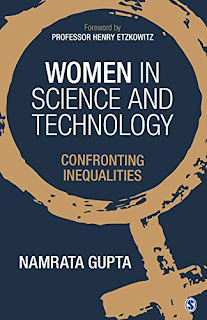 We speak about Women Empowerment these days in many forums. We conduct or take part in debates as to how to improve the contribution of women to the society. There is no denial to the fact that the role played by Women has improved considerably over the past two decades or so but is this enough? To put it in other words, are the Women's contribution in various fields especially in Science and Technology is up to the mark? This is what is author Namrata Gupta trying to decipher for us in this book.

I was stunned by the references she has had to go through before coming out with this book since they run in few hundreds, if not thousands. The book is divided into 5 chapters namely:

Through each and every book, Namrata tried to decode as to what is doing good and what is not. The pointers in each and every chapter are real vast. If you love the figures(numbers), you would surely fall in love with this book. Since the title demands certain aspects, these cannot be expressed better than in numbers and percentage. It is not difficult to remember these figures unless you are allergic to them or have not paid proper attention while reading the book.

The book is a culmination of facts and figures. It has derived information from various sources and has been presented in such a way that you wouldn't want to miss even a single page. The idea is genuine and the ways in which women were suppressed in the past and how they are slowly coming up breaking the myth of "Men are superficial" has been captured real well.

There were various facts which came as a real wonder for me. I am giving a few which could evoke your interest in this book, for sure.

a. In 1820s ad 1830s, there were no girls in traditional village schools or in the schools of higher learning.
b. All India Women's Conference(AIWC) , founded in 1927, perceived Women's education as important for women's equality.
c. Women in Engineering were unheard of atleast till the 1940s.
d. Leela George and A Lalitha were the first to graduate, entering the College of Engineering at Guindy in 1940 and passing out in 1943.
e. Kadambini Basu was the first woman to graduate from a Medical College, Bengal - in 1886.

There are hundreds of such facts in this book which makes it an interesting read.

The reasons as to why Women do not take up certain courses or why their pay package is less when compared to their men counterpart has been explained in detail. If you are working towards "Women Empowerment", this book shouldn't be missed for sure.