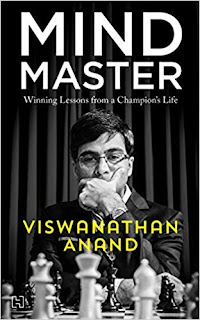 When Viswanathan Anand played for the World Championship title in 2013 in Hyatt Regency, Chennai, I badly wanted to see the match not because it featured the then World Champion Magnus Carlsen but to meet my childhood inspiration and idol Vishy(as he is fondly called by his fans). I did not get the ticket/pass but little did I knew by then that I would get to meet this legend on 4 different occasions including the book signing session of his autobiography.

I picked this book out of sheer interest and the reading proved to be worth my time and money. When you get to know up close about the Five Time World Champion, who being the India's first GM and has inspired to produce as many as 64(as the number of squares on the Chess board) till date talks about the volume though he humbly says that he has played a little part in inspiring the youngsters to take up the game.

The chapters of the book were interestingly named as the title namely:

1. Ditching the Ladder : Of Gut, Heart and A Winning Idea
2. Sticky Notes : Madras, Manila, Madrid and Everything In between
3. The Art Of Remembering : Hooks, Hacks and Serendipity
4. Win Some Lose Some : Emotions and The Power Of Objectivity
5. Gathering The Troops : How to make Preparation count and Tactics work
6. New York New York : The Making of a Champion
7. The Gift and The Grit : Making Talent Work Hard
8. Mining The Mind and Machines : Decision Making, Date and A New Giant on the block
9. Bonn Again : Finding Beauty in Risk
10. The Adversity Advantage : A volcanic ash cloud, a Road Trip and a Title
11. Two Cities One State : Battling Learned Helplessness
12. Staying Alive : Of today's wins and tomorrow's horizons

Each and every chapter is a gem in its own accord. I could sense his pride, achievement, hours of hard work that has gone into it coupled with passion, grit and sacrifice. He has also had a tinge of sarcasm imbibed in few places. The book begins slowly like a flight in the runway, gathers gradual momentum and takes off and after hovering in the sky for a while, makes a landing which is common for any person - as it cannot defy Physics/Newton's Law.

His revelation of having photographic memory and not contextual memory would make his fans feel better, even in case, he could not recollect their faces(despite meeting them on several occasion). He openly admits that he even forgot his wedding date and how he keeps forgetting little things mostly the mouse pads and the gemstone rings which his mother got it for him. This shows even the Word Champion had some issues to cope up with.

His neutral stance during the split of the Chess organizing body and how he did not support Gary Kasparov who stood for the FIDE Presidential elections were a classic. His mention about Manuel Aaron, Singer SP Balasubramaniam shows how their contribution had left a mark on him.

Vishy started as a Tennis Player.

He was asked by the organizers of the contest to not to take part in it anymore and he could take home as many books as he wanted.

He talks about the intervention of machines and AI(I had the privilege to listen to his speech regarding this first hand during the launch of ChessKid platform in Chennai) and how even he had to consult a sports psychologist once.

There are many such interesting events that has happened in his life which has been compiled in such a beautiful way that you would even forget of having spent a good 3-4 hours in reading this book. There is no wonder that this book is placed at #1 in the category of Sports on Amazon(Bestseller) as of today - 20th Dec,2019.

Vishy has inspired us for more than 3 decades and he would continue to do so for few more decades through this book, for sure....

This book is available on Amazon and in all leading bookstores, offline.