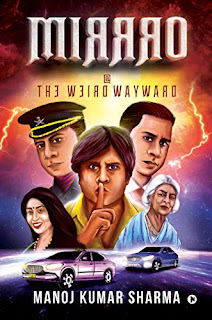 An unusual story which is the need of the hour. Before I could start, I must congratulate the author for his novel attempt in bringing out this novel which is not only though provoking but at the same time makes you to enjoy the read as much as I did.

The story begins with two back to back fire accidents in top firms. While the first one happens on 1st Jan, 2030 the next one happens on the very next day i.e. 2nd Jan, 2030. Even before the cops and the relevant authorities could ascertain the reason behind it, another peculiar incident comes up. Honestly speaking, as a reader, you would be thrilled and surprised by the sudden twists and turns in the events as these would keep you guessing. Like I mentioned earlier, since this story is unique, you can't even predict as to who is the culprit behind these acts.

The incidents never stops with these. There were few hundreds of events happen across the city.

Was this planned by the terrorists?
Was this a mass attack?
How many were involved in this?
What was their motto/motive?

The book is huge - be it in size or with number of pages. It is divided into 4 chapters namely

While the first chapter is more of drama in nature with full of conversations, this automatically evokes interest among the readers. If you love conversations, this is just for you. Even otherwise, you would find it changing its tone to a full paced novel, later. I must not forget to mention that even the names of the sub chapters were unique.

While the suspicion falls on one certain person, no one could provide concrete evidence nor they could prove it.

By the way, did you notice something unusual in the title?

What or Who is MIRRRO?
Is it an illusion or something else?

This novel gives you the tinge of both - Suspense and Thriller coupled with Sci-Fi. It would also make you agree that whatever is portrayed in the story is not a fiction, in real and it is the need of the hour that something like this, if happens, would be appreciated by the public in general. If you are concerned about the well-being of the public rather than the so called corporates who project themselves as the saviors of economy, you would surely love reading this novel.