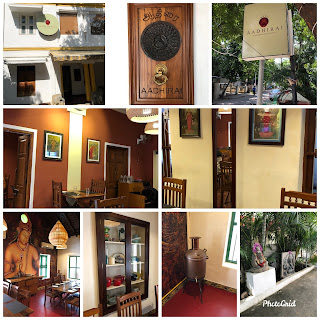 Aadhirai is a new restaurant in Jambulingam Street,Nungambakkam. There was another restaurant here earlier (if you have ever visited them). The content is curated by Mad Chef Koushik Shankar who is known to turn around the not so famous restaurants to become a Super Hit.

This place is just opposite to a prominent physician’s clinic & also a prominent Kollywood movie director’s office is also at close proximity.

They have enough space for 2/4 wheeler parking. The interiors were done tastefully.

Aadhirai, is a Tamil name & it literally means “A Special Star”. They are yet to open the first floor for the diners which is getting set up. Ground floor is functioning as of now.

We, the bloggers were invited to the first floor and were given briefing about the restaurant & the food. I was amazed by the display of select items which includes the age old copper boiler, hot cases (which were kept in display on the showcase). We were told that each of those hot case which looked brand new were Infact more than 60 years old. The bill/brand stickers were also intact.

The wall painting was done by a single person in a month. I was awe struck by its beauty. I’m sure, even you too will.

This is definitely a cozy place which you wouldn’t want to miss :) 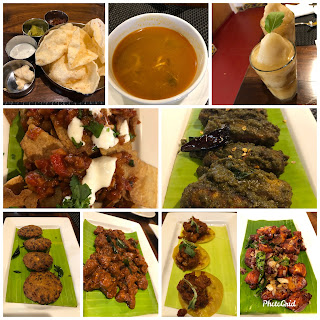 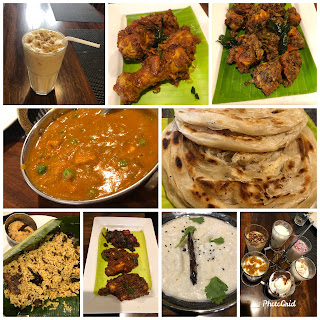 About the Food:
It was certainly a perfect lunch. We were briefed about every dish in detail before being served. Hence we knew what we were having in prior which is much appreciated.

What were the items that got served?

To begin with, we were served with water. There’re were three varieties of it. You read it right!

This was followed by an altogether different drink called Panagal Granita (its a Panagariya served in the form of Granita).

This was followed by Starters which included:

In beverage, we were served Kadalai Mittai Banana Shake.

In the main course, I, for the first time had Puliogare with Uppu Kari & Coconut Thuvaiyal. I’m sure, even you wouldn’t have heard or eaten this.

This was followed by Desserts which were served in tea tray. The items included:

a) They were unique.
b) They were tasty.
c) They would make you drool over it - again.
d) They are prepared meticulously.
e) They are awesome 😍

Do not forget to ask for their super special curd rice & three flavor Paneer (From low to super-hot flavors).