Book Review - Stories For The Innocents 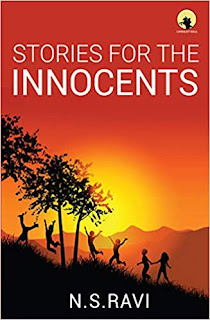 Nuranis Ravi has always showed a great variation when it comes to publishing his stories. It varies from one book to another. With his recent release, he has yet again proved his mettle by weaving the stories which are so natural and appealing.

This book is a collection of 10 stories and each of them has its own appeal quotient. The book begins with a story that talks about the prank show hosted by a radio channel. It then moves to a man from RSS who was conceived in a different notion by the protagonist only to be proved incorrect in the end. Then there is a story which was inspired by the pet, author had in real. This is certainly a painful story which catches the plight of those who lives in a war torn land.

Then there was a story about the ever caring father. There was also a story about a maid who wanted her belongings to be checked before she left the work. There was a driver who was misunderstood by the passenger. Then there is a border love story which talks about the plight of a couple who came from two different religion but decides to embrace a new religion altogether.

The stories makes you ask the following questions:

to name a few. I am sure that you would have a great read and can be done as a bed time stories as well to your kids, as most of them carries some great morals. Do not miss to pick your copy, today!