It’s #ResolutionBinge this January 2020 with ZEE5

ZEE5 has never failed to entertain us ever since its inception. The quality of the program they offered made them the market leaders in its segment. They always believed in the content rather than the quantity which has steered them to the position as to where they are now. Having watched a variety of programs in the past, I can certainly say with confidence that they knew the pulse of the viewers without which they couldn’t have been improving themselves in leaps and bounds.

The diversity in the programs being aired across different time segments has kept us captivated for sure. This is not a statement of exaggeration but facts since the TRP never lies which is made possible due to the overwhelming support from the public. The fact that they showed the variety across segments which includes Talk Shows, Live Show, Movies, Soaps, Music etc., has covered almost all the crucial aspects which we wouldn’t want to miss, otherwise. The movies that were aired last year were thoroughly enjoyed by the viewers. When you get to see movies like Simmba, URI, The Accidental Prime Minister, The Tashkent Files etc., what more would you need? This would in fact keep you captivated at your home even during the weekends, isn’t it?

Having done a tremendous job in the year 2019, ZEE5 is not sitting on their laurels. In fact, they wanted to make it even better for the viewers. When you keep improving yourselves year after year, you would end up getting greater patronage. Am I wrong in making this statement? I don’t think so.
Do look at what they did achieve in 2019. Let me tell you that these are mind-blowing figures.

Some of the note-worthy achievements by ZEE5 that I would like to mention here:

Having said all the above, you might wonder what is in store for us this year. It is January 2020 #ResolutionBinge which is going to wow us. 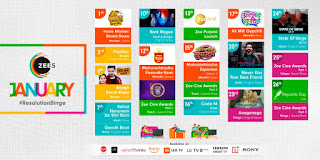 Usually, channels make a hue and cry when it comes to featuring some unique programs or hit movies. If you have watched ZEE5 in 2019, you would’ve now been convinced fully that you always got to see the latest content – be it Movies or otherwise. So, this time they are planning a January 2020 launch on ZEE5 and I am confident that this would be even more fruitful.

One of the main points I would like to highlight is diversity. They cater to the National and Regional needs. This is evident from the below mentioned consumption according to the language.
This is what makes them unique and special. There is never a question of problem with the language since you always get to watch the content of your choice on ZEE5.
The platform has A-Listers like Puneet Rajkumar, Arjun Rampal, Dia Mirza, Rakul Preet Singh to name a few and the list would get even bigger in the coming days.
I guess I have spoken enough about the platform and the content. If you are already a subscriber, you would probably know better than me. If not, do subscribe to ZEE5 today.
To give you a hint as to what’s in store for the viewers from ZEE5 New Releases in January 2020, do check here.