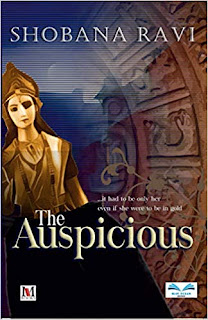 Shobana Ravi redefined the news reading when she was in a news reader in DD National. She was a known name in this field and had held her position for close to 2 decades. When I heard that she is coming out with a fiction novel, I could not wait but to grab the opportunity to meet her in person and get the autographed book.

The event saw the presence of various luminaries which included MaFoi K Pandiarajan, Hon'ble Minister of Tamilnadu - for Tamil Language, Culture, Archaeology and Museums, Movie Director Gautam Vasudev Menon, Mr B S Raghavan, IAS(Retd), Former Chancellor of ICFAI University and Dr Sudha Seshayyan, Vice Chancellor of Tamilnadu Dr MGR Medical University. The luminaries gave some inspiring and thoughtful speech. This is the first ever novel being published by BlueOcean Books(which is a Odyssey store venture) in association with MBooks.

Coming to the book review.

I thoroughly loved the thrill quotient of the book. I never thought Shobana Ravi would pen such an interesting and gripping story which would keep you captivated till the end. The writing style was fluid and she has taken a great care in giving importance even to the minute details which would make this book stand apart.

While it begins with Mallika, one of the protagonists being abducted by an unidentified gang, she gets help from an unexpected person. On the other hand, there were two powerful forces in the play - The Sealed Academy(a Good One) and The Nest (a Bad one).

What were they fighting for?

While The Nest deploys "P", a dreaded gangster to get their work done, he himself gets eliminated later.

On the other hand, there was this Baba who was believed to be the avatar of Lord himself. Can HE not stop the inevitable?

The movie takes you across various places and characters which were intricately woven to keep you at the edge of your seats. Some of the sequences would make you feel as if you were there. There was a mix of love, thrill, treachery coupled with spine chilling murders.

Yes. The 230 odd page is only the prequel since the author has planned to come out with a sequel which I am eagerly looking forward to.

This book is available on Amazon and on all leading book stores, offline.