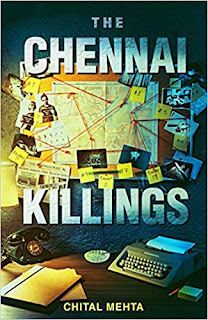 
To start with, I liked the cover page which immediately piqued my interest to grab this book. The title kind of gave me as to what content I could expect from this book. Though the story was progressing the way I guessed until the 3/4th of the story, things took a different turn after that. There was an unexpected angle which adds more power to the story. The way Chital handled the story, would make the reader fall in love with the story, instantly.

Story begins with a gruesome murder of Sandhya. CID Vikram Rathi gets assigned this case. He tries to untangle the secrecy by connecting each and every clue/evidence he gets from the case but before he could zero in on the murderer, he finds some connect with his deceased sister,Priya. While Sandhya's father almost zeroes in on the murderer, he too gets killed.

Who murdered Sandhya?
Who was responsible for the death of Priya?
What did Sandhya's father unfold?

Read this novel which starts slow but gathers pace as and when it progresses making it hard to put it away, until you finished it.