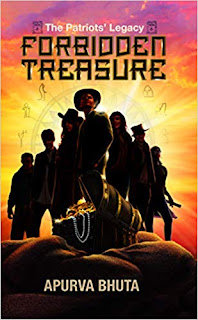 A story of its kind. I felt really glad that some one from India could write a story which is on par with Hollywood's all time hit - Mackenna's Gold. I do not exaggerate it when I say this because initially I was skeptical looking at the volume of the book(300 pages) but as and when I started reading it, I was sucked into the plot. I felt like watching a movie, in front of me.

Having said that, I sincerely feel that this book would make a great story line either for an English movie or for a web series.

The story begins with 7 adventurers being summoned from various parts of the World which includes:

The person who makes them come together was none other than Priscilla aka P.

Why were they summoned in the first place?
What connects them or what is common between them?

They were up against an formidable gangster called Zuraan who is aided by equally dreaded person called The Flying Fox.

What were they up to?

Though the title may give you some hint and the mention of another movie, the story is set to happen across the globe covering Jordan, Machu Picchu, Mexico, Rome, Brazil, China, Nepal and India. When a movie or a web series is made, it would be a delight for the viewers to get to see the breathtaking view of these places.

I can bet that once you start reading the book, you will not put it aside until you finish it.