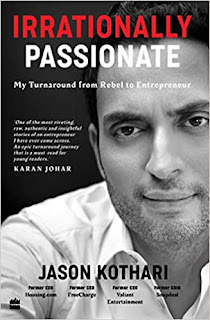 
"Leaders are born and not made" is what we might have heard for ages but after reading this book "Irrationally Passionate" by Jason Kothari, my perception has changed. The author has not come up in his life easily. He is also pretty much open in admitting that he had also face failures before he could become a success story. He even goes a step further to say that if someone thought that all the successful entrepreneurs never failed or always had walked on the rosy path, they were wrong.

The book is a first class account of a person who struggled on his own, braving the tides before emerging as one of the most sought out CEO's in the business world. It encapsulates the journey in a way which couldn't be done any precisely than this. Having born in a upper middle class family, Jason has to move to Hongkong since his father's profession demanded it and subsequently to USA before returning back to Hongkong. The way as to how he was bullied and his thought process of how his parents had let him face the world on his own was explained in a candid way.

The success story did not happen overnight. His reference in the very beginning of the book "You'll never know how fortunate you are to live in India, until you've been made to live elsewhere" would make each and every Citizen of India feel proud for sure. His leadership skills were honed at various instances - the first being his involvement in basketball. He explains so beautifully as to how he became one of the talented player through his grit and determination and what it taught him in his life. His initial stint with Domino's Pizza and what strategy he adapted to make a cool USD142 in a single hour took me back to childhood days where I too tried my stint in selling stamps. Unlike the author, I wasn't lucky enough to transform those into a real bigger ones but hey, I do not regret it because I am reviewing this book :-)

Opportunities are plenty and it is right in front of us. It is for us to spot that and grab it which in turn would yield good returns. This is what Jason did by selling comic books which eventually made him to bid for the then bankrupt Valiant Entertainment with no money in his pocket. How he bagged the company and transformed it is, History!!

If you think he was lucky in all aspects, you were wrong. He gets rejected by a girl, who later contacts him, when he was successful, to be rejected by him. His only love always turns into a failure though he did all he could, in his capacity. His stint in Thailand in getting trained in Muay Thai by Apidej Sit Hirun aka "Golden Leg"and by Wooden Man is another interesting read.

The book gives a detailed account of his stint as CEO of Housing.com, Freecharge and later as CSIO in Snapdeal and how he helped transforming them is a must read.

The book would definitely serve as an inspiration for budding talents and wannabe entrepreneurs for sure. It was thoughtful of Jason that he decided to come out with this book which would by default will serve as a guide - not how to succeed but not how to fail.

Though we might able to read the contents in few hours, the journey that was captured in this book, is atleast close to two decades but the experience, is for LIFETIME!!

This book is available on Amazon in both eBook and Hardcover formats.

The information you shared is wonderful to me, thank you and have a nice day. You can also search for information at Magical World EZ