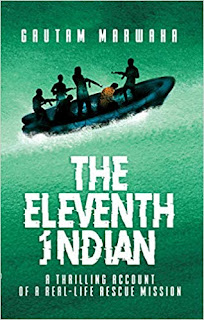 
This book is an excellent read. I have read stories about kidnapping and hijacking in the past but have never read one which involves pirates in the seas. Hence when I saw this title, I immediately grabbed it. Who else could explain this better than Commodre Gautam Marwaha?

Though this story is a fiction, it is based on a thrilling account of a real-life rescue mission and man, I must admit that I had a great time reading this novel. It captured the essence of the tension that prevailed during the event by making the characters speak to you.

A happy merchant navy guy whose uncle gets falsely implicated in a case in the Indian Air Force decides to leave the country to overcome the loss and immediately accepts to sail in Laximus. He was destined to face his fate along with his other crew members wherein they get attacked by pirates. When things were going as planned, they get a jolt from the Nigerian Navy.

Did they got rescued by the Navy?

While I was searching for this answer, things take a different turn wherein Mafia too gets involved. Now you might ask who were these guys and how did they get involved?

Pick your copy to read the first and account of this thriller which will make you understand that life of a merchant navy is not a rosy as you might think and various steps involved in negotiations in order to free the captured crew.