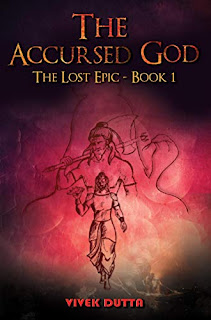 There were lot of books which is available out there that talk about Mahabaratha. Since this is one of the two major epics of India, most of us would know the story as a whole. Credits should be given to various authors who has relentlessly written or translated this epic in various languages. Though the main book is written by Ved Vyas, all the books that followed were based on this actual epic. We have also seen the epic on television as tele-serial or as a movie in the big screen.

I too had the same thoughts when I saw the title. I must also openly admit that I knew the epic in full but only when I started reading this book, I started feeling the truth. Please note that like most of the readers, even I have read only the generic version and not the real version – written by Ved Vyas.

The book is a real lengthy one and the cover page itself would have given you the idea of what this book is all about, if you knew the epic in full. I got it right at the very first instance. Vivek Dutta has taken a different approach to the story. As you know, the story cannot be changed but the approach can. This unique way of presenting the known story by incorporating all the minute details is what that makes this book, a real special one.

What did I like the most about the book?

I would highly recommend this book because this is an epic which is loved by all the Indians and this version wouldn’t fail to impress you.