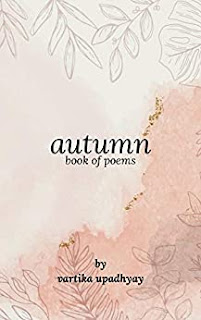 
This is an excellent attempt by a young poetess Vartika. I have read few books in this genre but I must admit that this collection of poems stand apart compared to others. I liked the approach which was adapted by her which is unique.

The book is divided into 3 parts namely:

I am not going to tell you as to what these above words mean and from which language each of these words were sourced from since you need to find it by buying this book yourself.

I felt like being on the runway because the poems make you feel like one since they begin in a slow pace and the intensity grows as you move further. There was also one more unique thing in this book. Vartika deployed various pictures to go on in a particular kind of theme for each part. I initially thought that these illustrations were done by her but later realized that they were sourced from Pinterest. Nevertheless, these added great value to the poems.

The poems are based on Love, Friendship, Heartbreak, Healing and lot of other mixed emotions. I would like to highlight few lines from couple of poems here to evoke your interest.

These lines moved me the most and I personally felt poems 24,25,34 and 35 were really good. Poem 35 had a unique way of referring to few by beginning the paragraph with the word "Looking".

I did not mention the title of each poem here because there wasn't one.

The lines from the poem "At the end of the line" which I had mentioned above gave me a feel of reading William Wordsworth's "Daffodils" as I felt it was in the same context but framed in the own words and unique style of Vartika.

This book is certainly worth its price - be it the eBook or Paperback and would serve as a perfect gifting stuff to your loved ones, if they like reading.

This book is available on Amazon in Kindle and Paperback formats.

Wow, I really find your article helpful. you might also want to check my content that is related to your article/blog.

Best books for 9 years old: that will improve their interest in readings

Best books for your 8-year-old see our recommendation

Best Books for 7-year old That Will Improve Kids Readability

Best Books For 6-Year-Olds: That Will Make Them Happy

Picture Books” Parents Wants For Their Kids In 2020

Stories For Kids: popular Kid Book-Books That Belong in Every Family Library”.

How To Teach Sight Words: Best Games, Books For Kindergarten

I could not resist commenting. Perfectly written.i have been surfing online more than 2 hours lately. But I did not find any attention-grabbing articles like yours. Personally if all site owners and bloggers made just write content just like your then the web will be helpful ever before. Everyone loves what you guys are doing. This kind of clever work and reporting/blog. Please keep up the great work, I have added you guys to our blog. Books, Books reviews, Kids books, Kids health-food tips & guide, Kids technology, kids toys, Books writing guides & tips, Books technology, Top Picks & Reviews