Sarath Babu 10:50 Events and Movies Others

This 3-month lock down has not affected me in anyway. Reason is simple. I had subscribed to ZEE5. You may ask what is special in it? First and foremost, this platform gives some of the most engaging contents across various genre and languages. I had spoken about few originals in Hindi in the past and now I am going to talk about my favorite serial – “Sembaruthi”.

Firstly, it features some of the best actors in the industry including my favorite actor Ms. Priya Raman. She is portraying the role of a strict mother Akilandeshwari. The way she conducts herself as this character would make you feel that if there was a person in this name, it would be her. As a doting mother, she was always protective of her Son. When you have so much of wealth, you certainly wouldn’t want your offshoot to marry a person who doesn’t have any background. 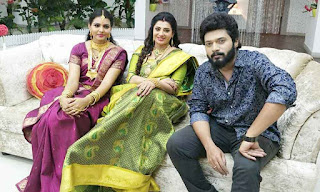 The story is a perfect culmination of love, affection, family sentiments coupled with treachery and backstabbing which would keep you on the corner of the seats. The other two characters that perfectly compliment Priya Raman are Kartik Raj and Shabana Shajahan. While Kartik (portraying the role as Adithya) is the son of Akilandeshwari, Shabana who dons the role of Parvathi comes to their palatial house as a domestic help and through her selfless acts and innocence gets into the good books of all including Adithya who eventually marries her.

The plot is full of twists and turns which also takes you on the journey of beautiful love that blossoms between Kartik and Parvathi. They face turmoil from all the directions. How they face each and every one of them and emerge as a doting couple has made this tele-serial interesting so far.

All these while Akilandeshwari wasn’t aware of the love, let alone marriage. Since the marriage has taken place and that too without the knowledge of her who has kept everything in her hands by controlling the family members including finance, it would be really interesting to watch as to how the story would unfold.

There would be lot of scenarios which includes:

1.       How would the interaction go between Akilandeshwari and Parvathi?

3.       Will the married life of Kartik and Parvathi be smooth and safe?

5.       Would they face any trouble from their close relatives?

There are so many other originals which you can watch by visiting ZEE5 and last but not the least, by subscribing to ZEE5 OTT platform, a user can stream the contents on 5 screens simultaneously. This means there is no quarrel among the family members whatsoever since each one can stream their own content as per their wish and preference.

What are you waiting for?