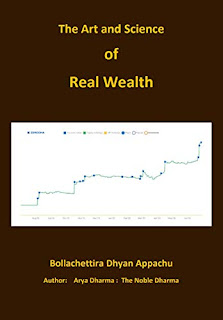 If you have read the previous book of the author, you would be able to connect well with the contents in this book as well. I was fortunate to read his first book “Arya Dharma” and before I could get over with the wisdom that the book is trying to spread all over, here comes the next one which is of a different genre but is very much connected with the first book. Hence if you are looking to read this book, which I would highly recommend, I would also suggest you to read his first book as well.

Having said that, I would also like to highlight that this book has some excerpts from Arya Dharma. There are only very few in the world who would accept their failure/defeat. Author Dhyan Appachu is one such soul. He has failed on few occasions which saw his fortunes dwindle but that did not stop him from going towards his ultimate destiny. I wouldn’t say that he has reached but he would surely be there sooner or later.

The book is way better than lot of self help books out there because it gives you a clear-cut idea about practical approach and the one that is coupled with Arya Dharma. How many of you have heard about Nikolai Kondratiev? He was one of the under-rated economists but in the opinion of the author, his theories were most suited in the long term and for this world in general.

He lost a staggering US$590,000 in 2006 in Options. Though he was successful in few instances, he lost out at crucial stages. In one of the bad days, he made a gain of US$15,000 though in reality it would have been more than 10 times, had he waited for one more day. Similarly, if had to invest in MRF back in 1990 as per the advice of his friend, that investment, which he did elsewhere, would have been worth INR590 Crores today.

Losing money is something which we all would want to forget, especially when the amount involved in huge, irrespective of how we lost it. Author lost his investments in Rasoya Proteins since he invested all in one stock instead of spreading over the risk in other companies which he identified that includes Morepen Labs, Confidence Petroleum, Mawana Sugars and Ludlow Jute. The INR 80 Lakhs which he invested this way in 2018 would have been INR 5 Crores by June 2020. He also openly admits of being addicted to Zyprexa and Risperidone but he could able to get rid of it by late 2018.

He removed the myth that exists in the larger society that Stock Markets are the only financial markets but in reality, it is only 15-20% whereas there are other less manipulated markets like Commodities Markets, Bonds, Currencies which offers immense opportunities. He also warns us of be aware about the bubble burst which may happen soon in India sending the value of the land prices to 1/10th of what it is today.

My mother use to tell me one thing “Only put money that you can afford to lose”. I found the same statement in this book which made me feel really happy and even more connected. Author strongly advocates this “Never go for All or Nothing because most of the times you will end up with Nothing”.

Do you know about Jesse Livermore?

He made USD100,000,000 during the crash of 2019 which is valued at INR 9,100 crores in 2017 value. Read about the 23 rules that found its way in the book. How the scrupulous stock traders make money out of unsuspecting investors is given in this book. This should work as a caution for all of you out there who is planning to venture into investing. It is not to scare you but to make you aware of the existing situation that would enable you armed with knowledge which you could acquire only when you invest some good amount of time studying the markets. He also recommends Webull app which is providing valuable information for FREE when it comes to spotting a trend change in the stock follow the money flow. Some of the fallen multi-millionaires like Martha Stewart, Rajat Gupta also finds their mention in this book.

His comparison of stock markets between USA and India is the highlight. I will not mention it here since you need to find it yourself in the book. He recommends investing in power sector.

Out of all types of power generation, why Hydro Power?

Why you should be averse in investing in Solar and Wind Energy?

Why is the power sector known as “Widows and Orphans”?

Read the book to find out all the answers.

What is Fish Love and True Love?

The mention “Past performance is no guarantee of future results” is like a nail in the coffin since it holds very much true to the present-day situation where even biggies like Lehmann Brothers have gone bust. I liked this line in particular “Anyone who says that they have achieved things easily without much effort has not tasted true success at all”.

A perfect read, is all I can say!!

This book is available on Amazon.