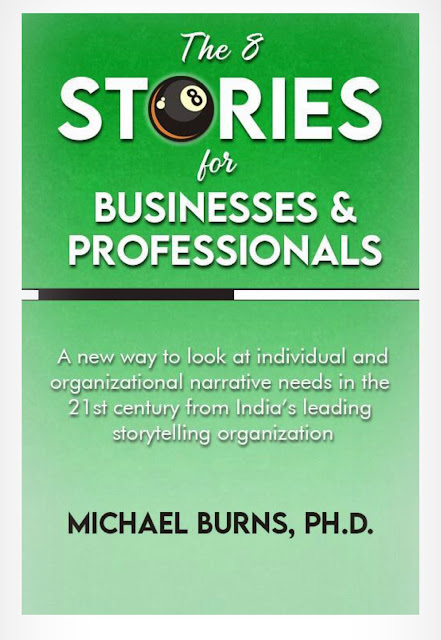 Title - The 8 Stories for Businesses & Professionals
Author - Dr Michael Burns
Genre - Self Help / Personality Development
Publisher - White Falcon Publishing
ISBN - 978-1-7355349-0-9
Dr Michael Burns is the founder of Tall Tales, India's longest running live non fiction storytelling series, which conducts performances, workshops, retreats and corporate training on story design and brand enhancements.He holds a Doctorate in Documentary Film History.
I had an opportunity to go through hi latest book " The 8 Stories for Businesses & Professionals" and found it interesting and appealing. I initially thought it would be another conventional type but I realized that my assumption was not correct.
This book, I felt had served dual purposes.
Firstly, it has recorded each and every aspect in great detail which would make even a novice, a professional writer.
Secondly, this book, as the title says would also help professionals and businesses to realize their potential by unlocking the aspects which was very much present before them but wasn't explored to its fullest potential.
The book is for serious readers because though the language that was used in this book is simple, the concepts that were mentioned/discussed were sophisticated. I tarted taking notes(which is what I usually do to recollect the important pointers as it is difficult to remember and recollect all of them).
I liked the way, the content was presented and concepts that were explained. I also opined that it would be completely stories and expected it from the beginning but these stories appeared only after the first half. So you could understand the seriousness of the topics that were discussed.
The book starts with a concept called BASE which is the "Foundation of the Book".
When I saw the mention about the Characteristics of a story which said that it needs to have the elements including sub-elements. If they are missing, it may not be a story, I could not disagree.
Then comes The Arc:

The usage of What, When, Where & Setting coupled with how & why and its importance was mentioned in a detailed manner..

As an author, one must know the Importance of a twist. Wouldn't you agree?

(The above are elements of a story. It is not about making the story interesting)

There was a Story about a meteor in this chapter where author did not use the terms “Win” or “Lose”. Read the book to know why?

Then comes The Call and The Refusal Of The Call.

The mention of Super Mario game in The Quest shouldn't be missed.

Do you know the importance of Complications?

Character or Plot are threads that connect them and that make them part of the same fabric. At this juncture, author talks about a story having a minimum of 3 obstacles. Do you know why this is the case?

The need of Catastrophe was discussed next. Here we also get to read about "needy ghost".

Lastly, as we all know, it is about Climax.

William Goldman “give the audience what they want but not what they expect” was quoted in the Resolution. Author also talks about the difference between Open vs Closed resolution

Finally, author talks about Denouement. Though I have heard about it, I came to know about the actual usage of it only after reading this book which is given below:

Everything that happens after the climax is denouement. This element (5th) isn’t Universal. It may or may not be present.

Now comes the much awaited 8 Stories which includes

Finally it is Harvesting. Let us see what this discusses in the book:

Look for the stories where stakes are High

Ensure it’s a one way presentation. Save interactivity for a different time.

Practicing is a part of Harvest process

This book is a MUST READ if you're seriously considering about writing a book or want to see how you can approach business in a way that you have not done it before. A perfect book for Professionals.

This book is available on Amazon(World - except India), Amazon India  in both eBook and Paperback formats.